Saul Goodman’s (Bob Odenkirk) office is one of the most important places in the Breaking Bad and Better Call Saul series. A location chosen, like all the others, in Albuquerque, near the studios where showrunners Peter Gould and Vince Gilligan have set up shop and commissioned the construction of much of the interior design.

The location was chosen by the location teams for several reasons when introducing the character of Saul Goodman in Breaking Bad. Eccentric but not enjoying the same prestige as some of his colleagues, Saul Goodman had to settle in a place that corresponded both to his aspirations and to his marginal status. So, at first glance, the office is not very impressive, even if the giant inflatable Statue of Liberty hanging from the roof takes care to underline the atypical character of the character. Saul Goodman’s quirky and colorful side is much more evident inside, however, with a desk made of foam Roman columns and other deceptively sophisticated moldings.

An office down to the last detail

When it comes time for the producers to tell the “birth” of Saul Goodman in Better Call Saul, it is clear that the lawyer’s office as it appeared in Breaking Bad should make a comeback. An office that had to be recreated in great detail to ensure perfect continuity between the two works. Fortunately, all the elements of the set were preserved in a storage warehouse. Nevertheless, the challenge is great, especially since Better Call Saul is filmed in higher resolution than Breaking Bad. The show is thus led to reveal details that were previously more discreet. 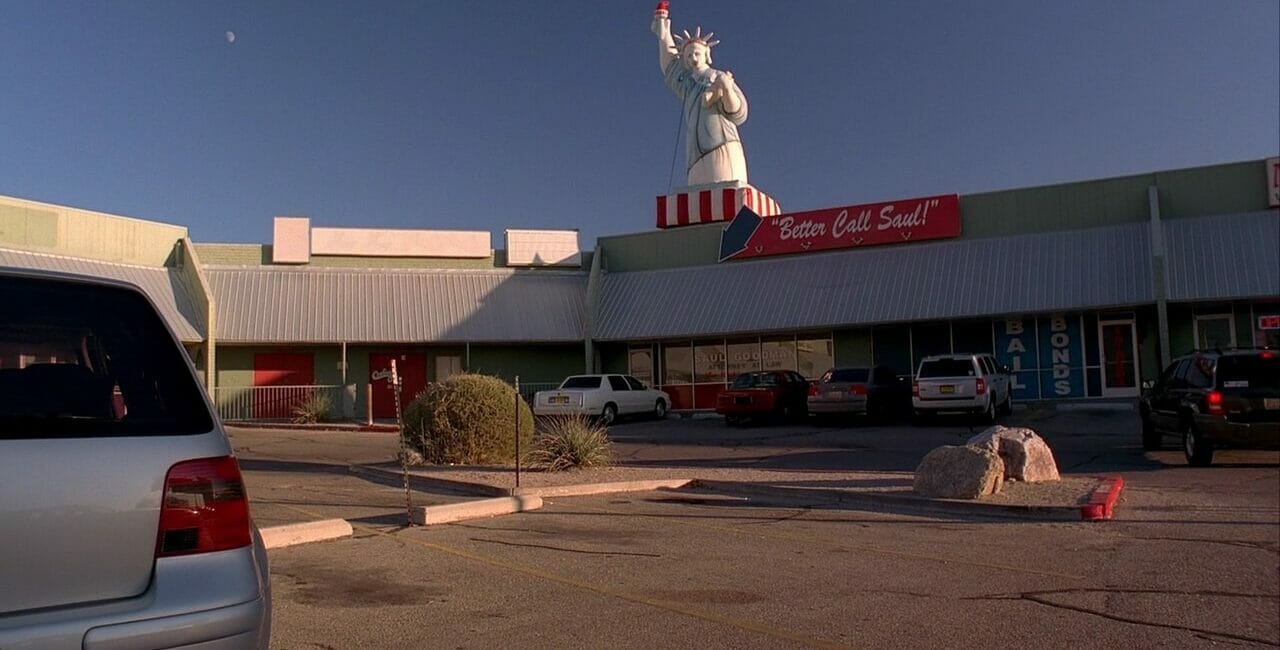 On the outskirts of downtown Albuquerque, in the Loma del Rey neighborhood, not far from the Sandia Foothills Open Space hiking trails, this address has become a must-see thanks to the Better Call Saul and Breaking Bad series.

If today this commercial premises houses the Duke City Sports Bar, it is still known for having housed the offices of Saul Goodman, the character of the series Better Call Saul and Breaking Bad. A completely redesigned place since the end of Better Call Saul, now dedicated to parties and the broadcasting of sporting events.