TV show Stranger Things Matt Duffer and Ross Duffer (2016)
Joyce Byers (Winona Ryder) has worked for years at Melvald's General Store, a small general store. The place to be for all Hawkins residents. It is here that she finds the tinsel that allows her to communicate with her son Will (Noah Schnapp) while he is trapped in the Upside-Down.

Based in Atlanta, Stranger Things production has been scouring the area to find the perfect locations to add substance to its plot. And what better than a real store, a drugstore in this case, to play a business on screen? Very regularly visible during the first two seasons, the Jackson Drug, on2nd Street in Jackson thus welcomed the Duffer brothers and the directors, as well as Winona Ryder, whose character Joyce works full time in a drugstore in Hawkins. Very important in the plot, the store, named Melvald’s General Store, allows the mother of the family to find the necessary equipment to communicate with her son Will (Noah Schnapp), who disappeared in the Upside-Down.

Winona Ryder was able to make a comeback thanks to Stranger Things. She was the first actress recruited by the Duffer brothers, along with David Harbour. A chance for his partner, he whose admiration for the actress has never known any limit. To build her character of a distressed mother, Winona Ryder was inspired by Meryl Streep’s look in Silkwood. Her portrayal of a mother searching for her missing child also echoed her fight against child abduction. She is also a member of the Polly Klaas Foundation, which is dedicated to the prevention and search for missing children. She also dedicated the film Little Women, in which she plays Jo, to the same Polly Klass, a young girl from her hometown of Petaluma, California, who was kidnapped and murdered.

The cast of Stranger Things includes two actresses who played the character of Jo March in different adaptations of the novel Little Women: Winona Ryder in the 1994 film and Maya Hawke in the 2017 BBC TV movie. 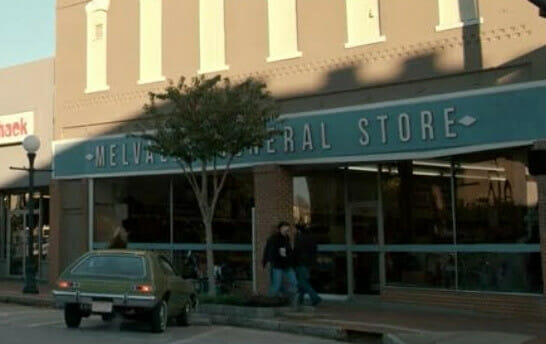 This commercial space was home to a drugstore for a long time, which is now closed. A restaurant of the Papa Johns franchise is also located there.

With its brick facade, the business at 124 N Mulberry Street is one of the main ones in the small town of Jackson, Georgia. A town of 3,934 inhabitants, mainly known for regularly serving as a... Learn more about 124 N Mulberry St