Having just discovered her new powers, Kamala (Iman Vellani) is trying to balance her family life, school and the arrival of new superheroes. Her family is very strict about religious practices, so Kamala goes to the mosque regularly.

Although the action is supposed to take place in Jersey City, Marvel Studios – as usual – shot a large part of the series in Atlanta. In reality, it is not a real mosque but the Fox Theatre in Atlanta.

Only the exterior scenes were shot there. The city’s Krishna Life temple and monastery were chosen for the interior scenes.

Be geeky and stylish at Christmas? It’s possible with this Marvel Comics sweater!

G. Willow Wilson, the writer of Miss Marvel, chose to create Kamala as a Pakistani girl having to come to terms with her life as an American teenager and the customs of her conservative Muslim family.

This dynamic made the character very engaging, attracting a new audience. Just like Peter Parker in his first appearance in the 1960s.

Miss Marvel is a recent comic book character. She first appeared in 2013 in issue #14 of Captain Marvel.

Atlanta’s Fox Theatre is one of the premier cultural venues in Georgia’s state capital.

In 1928, the Fox was designed not as a performance hall, but as the future headquarters of the Shriners organization (an ancient Arab order). The structure was inspired by the architectural styles of mosques such as the Alhambra in Spain or the Egyptian temple of Karnak. This design will soon become a financial burden forcing the organization to sell the building. It was later acquired by a film magnate: William Fox. He will transform the place into a cinema.

Today, the Fox Theatre is used as a theater and hosts more than 150 performances per year with a capacity of 4665 seats. 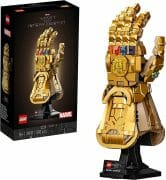 Get the most power with the Lego replica of Thanos’ iconic Infinity Gauntlet. Measuring over 31 cm tall, this 590 piece model is a great gift for fans of the Marvel universe.