Movie
Relive the atmosphere of Taxi Driver's New York by staying at the Riu Plaza New York Times Square Hotel on the corner of 8th Avenue and 46th Street.

Want to discover New York in a different way?

If Los Angeles is the birthplace of Hollywood, New York is for many the pop culture capital of the world. And to say! She embodies an unbridled creative freedom. The city that never sleeps has been home to a large number of screenwriters, directors, actors, musicians, cartoonists and writers.

Numerous works shot in its streets come to mind such as Ghostbusters and its mythical fire station, Once Upon a Time in America with the Manhattan Bridge… and of course Taxi Driver where New York plays a very special role.

But where to stay to extend the experience?

Ideally located in the heart of Manhattan, theRiu Plaza New York Times Squares hotel offers a concept of urban tourism ideal for a professional setting, or for your escapades in the Big Apple in search of New York’s cult places such as Central Park, Rockefeller Center, the Empire State Building, Carnegie Hall…

theRiu Plaza New York Times Squares Hotel is composed of 29 floors offering a wide range of services and facilities, including a fitness room, several meeting rooms, several bars and restaurants offering onsite or takeaway consumption, and a luggage storage facility to facilitate outings and visits to the city.

After a stroll in search of the Spider-Man or Friends locations, the rooms of theRiu Plaza New York Times Squares hotel are perfectly equipped to relax thanks to the mini-bar, desk, television and air conditioning.

In addition to being the perfect hotel for a stay in New York, theRiu Plaza New York Times Squares hotel has a special connection to the 7th art.

We all remember the crossroads visible on the poster of Taxi Driver. Emblematic work of Martin Scorsese, the film is a real success at its release. Addressing sensitive issues such as the reintegration of Vietnam veterans, prostitution and mental illness, the feature movie is important in more ways than one. A monument of the seventh art in the form of a snapshot of a bygone era but also of a city in full revolution. Its poster is a perfect example since it shows an adult cinema in the background. Today, the place has given way to the very respectable and splendid Riu Plaza New York Times Squares Hotel. 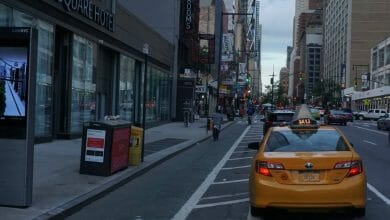 After his night’s work, Travis Bickle (Robert de Niro) walks to this spot while smoking a cigarette. You can follow in his footsteps and replay the scene used to promote the film by crossing 46th Street on the west side of 8th Avenue. A cult image. This was the location of the Show and Tell Theater, the adult movie theater where he goes. The building has since been demolished and made way for the splendid four-star Riu Plaza New York Times Square hotel.

I prepare my stay!

So you see, if you want to discover New York in the coolest way and you’re a die-hard Taxi Driver fan, a stay at theRiu Plaza New York Times Square hotel is a must.