Movie I Am Legend Francis Lawrence (2007)
The Washington Square Arch is right across the street from Robert Neville's place of residence and, in the film, looks terrifying at night.

Frequently, the hero looks at him when he enters or leaves his house. While still majestic in appearance, the building is derelict like all the streets, buildings and monuments of New York City, according to the plot of the feature film.

The bow takes on a terrifying look in the film. An amusing wink, this building was erected in 1889 on a former cemetery.

For the purposes of the film, the Christmas decorations in the square were dismantled during the filming. The feature film was shot in the fall and winter of 2006-2007.

The year the Washington Square Arch was erected.

In order to get to know Abbey, the bitch playing Sam, Will Smith had several meetings before the filming of the film began. He was thus able to tame her and put her at ease. The animal appears in a very large part of the feature film. 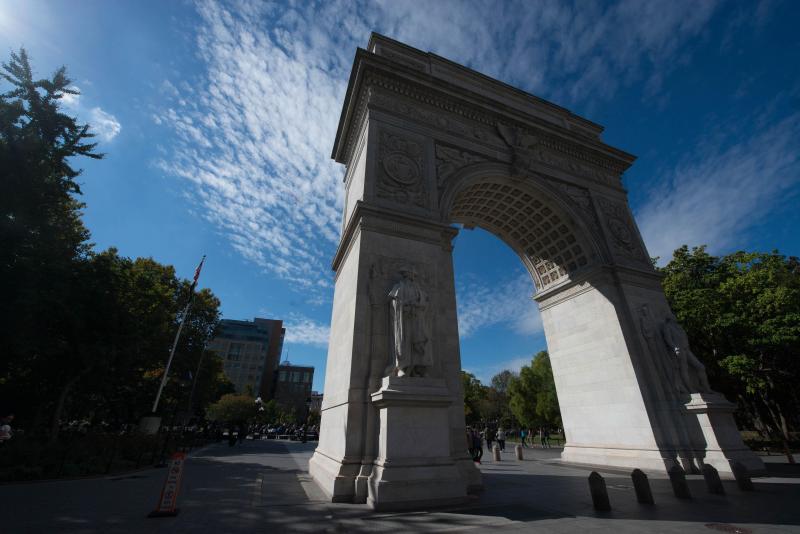 Construction of the Washington Square Arch began in 1982 and was completed seven years later.

The building was erected to commemorate the centennial of the beginning of the presidency of George Washington, first president of the United States (1789-1797).

The Washington Square Arch was designed by American architect Stanford White. Initially, this monument was intended to be temporary. Designed in plaster and wood, it was financed by William Rhinelander Stewart. But the building was so popular with the inhabitants that a permanent arch was built in its place.

Made of white marble, the Washington Square Arch is an imitation of the triumphal arches of Roman antiquity. The sculptures represent illustrations of war and peace. Its frieze is strewn with 13 large stars and 42 smaller ones, interspersed with capital Ws. In 1918, two statues of the first president were added on the north side.

During archaeological excavations, a tombstone and his coffin were discovered three meters deep. They were dated 1803.

Discover all the places I Am Legend on our map