Saga Back to the Future
Movie Back to the Future Robert Zemeckis (1985)
The Twin Pines Mall is Marty McFly's (Michael J. Fox) starting point for the past. Doc Emmett Brown (Christopher Lloyd) in the parking lot his Time traveling DeLorean.

The parking lot of this shopping centre quickly became a cult.

It was here that Marty McFly (Michael J. Fox) joined his friend Doc Emmett Brown (Christopher Lloyd) at 1:15 a.m. on October 26, 1985. The young man witnesses a great discovery, the journey through time.

Doc installs Einstein, his faithful companion, at the wheel of the time machine, a DeLorean. Why this car? As Doc explains, “If you’re gonna build a time machine into a car, why not do it with some *style?*”

After reaching the speed of 88 miles per hour, Einstein is propelled into the future, under the astonished eyes of Marty, thinking that the dog was killed during the journey.

Marty is not the only one who thought that. At the first test screening, spectators were horrified to witness the dog’s death. They were reassured a few minutes later when Einstein reappeared, as if nothing had happened.

Libyans soon find Doc, who stole the plutonium that was supposed to be used to make a bomb for them, but ultimately used as fuel for the space-time convector. They kill Doc in front of Marty, who rushes into the car to sow them, leaving in spite of himself in 1955.

When Marty manages to return in 1985, he plans a few minutes in advance to warn Doc of his imminent death and thus save him. But the car made his own and Marty arrived too late at the now Lone Pine Mall, named after a “tragic” event at the Peabody farm in 1955 changed the course of history and the name of the complex.

However, Doc’s counterpart in 1955 was able to read Marty’s letter in time before his departure and the scientist stands up, without injury, since he took precautions.

In the audio commentary on the film’s DVD, Bob Gale, the screenwriter, recounts that many fans gathered on the morning of October 26, 1985 to see if something was going to happen. Although Marty and Doc were not there, the mall installed a replica of the DeLorean, the Dr. truck, in its parking lot. E. Brown Enterprises and a fake sign in October 2015 for the anniversary of the saga and the coming of the characters in the future.

Founded in 1974, Puente Hills Mall is a regional shopping center with 155 stores.

Its flagship stores include Burlington, Macy’s and Ross Dress For Less.

With a surface area of 1,000,000 m2, it extends over two floors. Its cross-shaped design was developed by The Hahn Company. 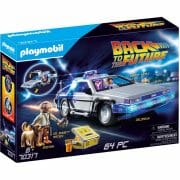 Playmobil DeLorean Back to the Future 70317

Discover the DeLorean of Back to the Future Playmobil Version

To be built or left in a box, the DeLorean from Back to the future Playmobil version is very detailed. With two LR03 batteries, the time convector and blue siding light up for a true dive into the heart of the film. The doors open and the wheels fold to make the splendid car fly.

Discover all the places Back to the Future on our map