Fanspot
The rescue of Wonder Woman

Comics Wonder Woman #122 (1959)
Wonder Woman is in trouble. She is hanging from the spire of the Empire State Building, ready to fall into the void.

Wonder Woman on top of the Empire State Building

Eighteen years after Wonder Woman‘s first appearance in the comic book universe, the reader finds her in a very bad way, hanging from the spire of the Empire State Building. Under the direction of Robert Kanigher and Ross Andru, the Amazon queen achieves this feat after being chased by a flying saucer. In this issue 122 of the series, the two authors continue to imagine adventures to Wonder Woman in New York.

Thus firmly clinging to this piece of iron, Wonder Woman avoids certain death. This point at the top of the Empire State Building was originally intended as a docking point for airships. This idea was quickly abandoned when the second Zeppelin attempting this approach nearly overturned.

It was in 1941 that William Moulton Marston created Wonder Woman. This double degree in law and psychology born in 1893 was also the inventor of the lie detector. After unsuccessful attempts as a movie writer, he was hired by DC Comics in the late 1930s as an editorial consultant.

He then proposed to create a superhero who would not win his fights by his strength but by love. His wife, Elizabeth, gave him the idea of a female superhero to distinguish herself from all the other male characters in DC.

A model of strong, free and courageous femininity

William Moulton Marston explains that the creation of the Amazon Queen was intended to : “set up a standard among children and young people of strong free courageous women and to combat the idea women are inferior to men, and to inspire girls to self-conﬁdence and achievements in athletics, occupations and professions monopolized by men.”

For the character of Doctor Psycho, Wonder Woman’s enemy, the writer was inspired by Hugo Münsterberg, his undergraduate psychology tutor. Notorious anti-feminist, the man had all the assets to become a paper super-villain.

The first superheroine in the comic book galaxy, Wonder Woman, like her creator William Moulton Marson, is a feminist icon that has spanned the decades.

A former student of William Moulton Marston, Joye Hummel took over as Wonder Woman’s screenwriter in 1946. It is replaced from the number 29 of its adventures. 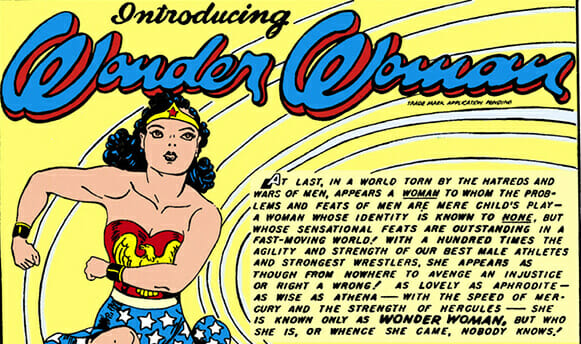 One of his works stands out in particular and has left its mark on generations of film lovers: the film King Kong (1933). The mythical Art Deco building, inaugurated in 1931, is one of the most famous buildings in the world.

Its name comes from “The Empire State”, the nickname of the state of New York.

The lobby of the Empire State Building reflects the image of the building: huge! It is the equivalent of three storeys high and is richly decorated in marble with an aluminium relief representing the silhouette of the monument. Its 86th floor observatory offers a breathtaking view of the metropolis.

If you visit during the day, please keep your ticket in your pocket, as it will allow you to go back up for free in the evening to admire the city in a different light.

Every evening, it lights up in different colours to celebrate a special event.

Discover all the places Wonder Woman #122 on our map