The Arconia, a key character

The Arconia. This gigantic Upper West Side building has become the center of New Yorkers’ attention since the murder of Tim Kono (Julian Cihi) and the launch of a brand new true crime podcast, Only Murders in the Building. Led by former TV star Charles Haden-Savage (Steve Martin), former Broadway producer Oliver Putnam (Martin Short) and mysterious artist Mabel Mora (Selena Gomez), the show gets bigger and bigger as the investigation progresses.

By including the building in the title of their podcast, the three protagonists make the Arconia the fourth inseparable member of the group. John Hoffman, co-creator of the series with Steve Martin, is convinced of the importance of the building as a character, even if for him, this formulation is a bit cliché. “But I like the challenge of going beyond that cliché a little bit,” the producer told The New York Times.

A little history. Arconia is actually Belnord. Contrary to what was announced in season two, the building was not built by Archibald Carter, Bunny Folger’s (Jayne Houdyshell) fictional grandfather, but by H. Hobart Weekes of Hiss and Weekes. There is very little chance that the corridors are dotted with secret passages that allow you to discreetly go from one apartment to another, but there is an underground parking lot that is little known to the building’s inhabitants.

The plans for the building were carefully scrutinized by Steve Martin and John Hoffman. Steve Martin is passionate about this type of construction and architectural plans. He has already searched his own residence, the San Remo, for secret passages and discovered staircases connecting certain apartments. The two creators were also intrigued by the story of the woman who discovered another apartment behind her bathroom mirror during the pandemic.

Another building than the Belnord?

Yet the Belnord was not John Hoffman’s first choice. He was very interested in the Apthorp in which Nora Ephron had lived, and particularly in its immense inner courtyard. The Apthorp did not wish to host the shoot, so the Belnord offered to do so. A nice consolation since John Hoffman knew the building he looked at with envy during his studies, in the manner of Charles-Haden Savage’s father.

Many of the building’s residents played the game as extras, especially in the first season’s finale. Residents were delighted to see the three stars of the show at their windows and up close as they passed them in the corridors of the huge residence.

The series is a real success, even among celebrities. During the filming of season two, Selena Gomez’s friend Mariska Hargitay walked past the building and, according to John Hoffman, shouted to the crew “‘Is this where we shoot Only Murders in the Building?’ They said yes, and she said, ‘Oh my God, is Selena here? I want to say hi to her. And can I be on this show? I love this show.'”.

Belnord was the site of the longest rent strike in the United States, which lasted 16 years.

The Arconia in Only Murders in the Building. Photo credit: Hulu 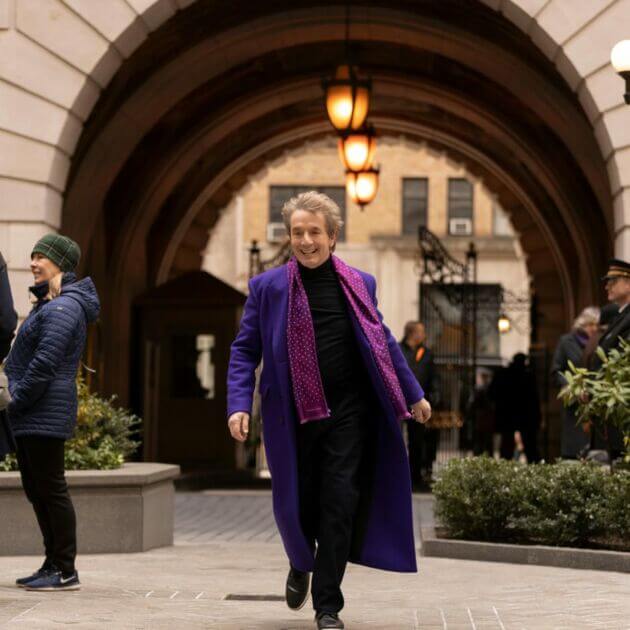 The Arconia in Only Murders in the Building. Photo credit: Hulu

Built in 1908, The Belnord was, at its time, the largest apartment building in the United States.

Designed by the architectural firm of Hiss and Weekes, in 1909 the building had 175 rental apartments on 14 floors. Its huge interior courtyard is still one of the largest in the city.

In 1978, the building’s owner, Lillian Serril, made life hell for all its residents. The building had become dilapidated but no work was done. On the other hand, the rents were well collected and the latecomers were harassed. Exasperated, the residents began a rent strike, which lasted 16 long years, a record in the United States.

The arrival of a new landlord, Gary Barnett, ended the strike after the requested work was completed. More than $100 million was invested to restore the building to its former grandeur.

Resold in 2015 to a group of investors, most of the apartments have been luxuriously renovated. But residents descended from the original owners still remain, ensuring Belnord has a rich social mix.