Indiana Jones (Harrison Ford) breaks into the German Nazi submarine base. This scene from Raiders of the Lost Ark was not shot in Egypt as the script of the film wanted but Quai de l’Entrepôt, located in La Rochelle (France).

Doctor René Belloq (Paul Freeman) then ordered the soldiers to transfer the Ark of the Covenant to the submarine in order to take it to Berlin and show it to Adolf Hitler. Spectator of the scene, Indiana Jones cannot however intervene directly to thwart the Nazi plans. He’ll have to wait until he’s in the desert for that.

On 23 June 1980, Steven Spielberg and his film crews set up their cameras in the submarine base at La Rochelle (France). It was then in the spotlight because a few months before, Wolfgang Petersen shot the beginning and end sequences of his film Das Boot taking place in 1941. The German director used the interior and surrounding exteriors for his scenes, including the very narrow passage in front of the lock. A friend of Spielberg’s, Petersen told him about this place, which had remained identical to its construction.

Huge bunker dating from the Second World War, the submarine base of La Rochelle sheltered German U-Boats during the conflict. It is located Quai de l’entrepôt in the city of Charente-Maritime.

This submarine base was built between 1941 and 1943 by the Todt Organization, a German company.

It was part of the famous Atlantic Wall that the Germans built during the Second World War to protect the coast. This bunker, then called the La Pallice submarine base, after the district of the city where it is located, housed the submarines (U-boats) of the Kriegsmarine. It could accommodate up to six of them. 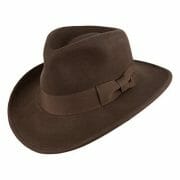 Discover all the places Indiana Jones on our map