Saga Spider-Man
Movie Spider-Man : No Way Home Jon Watts (2021)
The final battle between the different Spider-man and the nemesis of their universe takes place on the Statue of Liberty.

After losing Aunt May, Peter (Tom Holland) is totally lost, filled with hatred for the Green Goblin (Willem Dafoe). After meeting his Spider-Man counterparts (Tobey Maguire and Andrew Garfield) from other universes. The Peter Parkers decide to go to the site of the Statue of Liberty to lure out the various villains and try to heal it one by one. A titanic battle ensues against Electro (Jamie Foxx), Sandman (Thomas Haden Church), the Lizard (Rhys Ifans) and of course the Green Goblin. In the film, a scaffold surrounds the monument. She’s in the middle of a renovation to get her to attach a Captain America star shield following his disappearance. 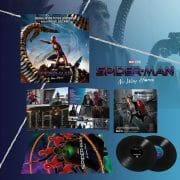 Listen to the soundtrack of the latest movie of the famous Spider-Man franchise with this beautiful double vinyl accompanied by a poster of the feature film. The must-have item for all Spider-Man lovers.

To promote No Way Home, Tom Holland revealed that Alfred Molina, the interpreter of Octopus, was lost because of the special effects. Indeed, in 2002 for Sam Raimi’s Spider-Man 2, the actor was equipped with puppets on his back to reproduce the tentacles. Today, methods have evolved. The actor no longer had a puppet, which allowed him to be more free in his movements. This disappearance of constraint has lost the actor, creating several laughs during the shooting.

The film is 149 minutes long, or 2 hours 29 minutes. This makes it the longest Spider-Man film, counting also the Sam Raimi and Marc Webb films.

One of the most famous monuments in the world, the work of Frenchman Auguste Bartholdi is not only the emblem of New York, but also and above all that of freedom, a value so dear to Americans. A powerful symbol, strong images: destruction, protective allegory, a happy ending, hope… The Statue of Liberty has inspired creators and its radiance does not seem to be about to fade away.

Offered by France in 1886 to mark the centennial of the American Declaration of Independence, the Statue of Liberty has long been America’s first vision for millions of migrants.

Their boats sailed along Liberty Island, on which the 93-meter-high monument stands, before their passage to immigration on Ellis Island. Named Liberty Enlightening the World, the statue looks toward Europe and the date of the proclamation of independence, July 4, 1776, is engraved on its tablet.

The broken chains at its feet are a metaphor for freedom. To visit it, you must take the boat from Battery Park in southern Manhattan or Liberty State Park in New Jersey and it is recommended to buy tickets in advance.

Decorate your landmark with this 9-inch figure featuring Peter Parker in his Iron Spider-Man armor from Avengers: Infinity War.