Movie The Unforgivable Nora Fingscheidt (2021)
Just released from prison, Ruth Slater (Sandra Bullock) is placed in a shelter in the heart of Seattle's Chinatown. His new living conditions are far from idyllic. In fact, the restaurant above which the shelter is located is not in Seattle but across the border in Vancouver.

September 2009. Streaming giant Netflix has announced that it will invest $500 million over five years in the creation of feature films and series shot exclusively in Canada. Already popular with Hollywood’s historic studios because of the largesse it offered to productions, Canada became a kind of promised land for fictional creators. In keeping with this landmark deal, Netflix produced the hit series Maid, filmed in the Vancouver area and then several other pieces of content, including Unforgivable.

The Unforgivable organizes Sandra Bullock’s return to the firm with the red N, a few years after the success of Bird Box, Susanne Bier’s post-apocalyptic film, once considered the biggest success of the platform. Although the action is supposed to take place in and around Seattle and some long shots were shot to really anchor the story in the megalopolis, director Nora Fingscheidt set her cameras in Vancouver. The shelter to which the main character is sent is located in the heart of Vancouver’s Chinatown, near a restaurant already used in the past by the series Kung-Fu and rented several times by The CW Television Network for the production of its series.

However, as is often the case, only the exterior shots make use of this address. The room Ruth is to share with other former inmates was built at the Canadian Motion Picture Park Studios in nearby Burnaby.

The Unforgivable is the second Netflix film in which Sandra Bullock stars. 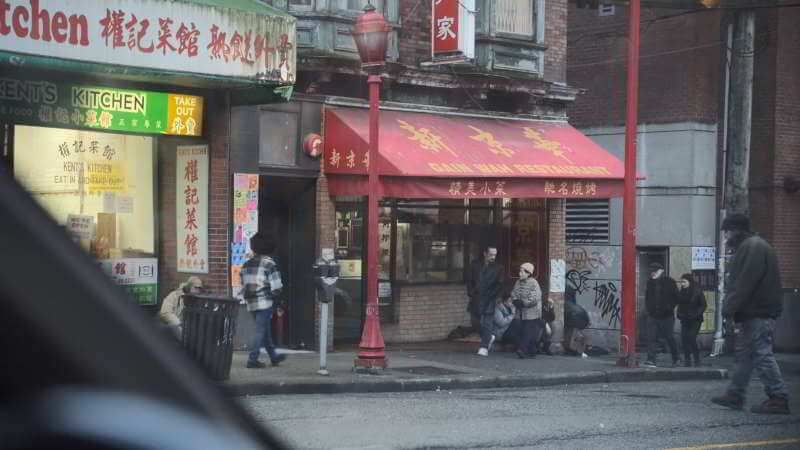 Gain Wah Restaurant is one of the many culinary establishments in Vancouver’s Chinatown neighborhood.

Like those in San Francisco and other North American cities, Vancouver’s Chinatown is marked by spectacular gates adorned with ornaments typical of Chinese culture. It is the largest Asian neighborhood in Canada.

Built around Pender Street, it was created when the city sent 15,000 immigrants from China to work on the construction of the Canadian Pacific Railway in the 1880s.

Over the years, people from Peru, Argentina, Brazil, Mexico and Nicaragua also settled here, giving it a very cosmopolitan identity. It has several notable buildings including the Millennium Gate, built in 2015, the China Gate, an arch first erected in 1995 and then completely redone in 2005, and several remarkable monuments and gardens. These cultural riches have encouraged Vancouver to classify Chinatown as a National Historic Site of Canada in 2011.

Discover all the places The Unforgivable on our map