Music God Save the Queen Sex Pistols (1977)
God Save the Queen, the Sex Pistols' punk version of the British national anthem, was born in a London squat not far from Sex, the boutique owned by Vivienne Westwood and Malcolm McLaren, where the band formed in 1975.

It all started in 1972 with The Strand, the combo of lead guitarist Steve Jones, drummer Paul Cook, guitarist Wally Nightingale, bassist Stephen Hayen and organist Jim Mackin. Steve Jones frequents the store Too Fast to Live, Too Young to Die, soon to be called Sex. Amazed by the charisma and raw talent of Steve Jones, Malcolm McLaren, the co-owner of the place, with Vivienne Westwood, decided to take matters into his own hands. When Steve Jones asks him if he knows a bass player, the latter introduces him to Glen Matlock, one of his employees. In 1975, after having briefly managed the career of the New York Dolls during a long stay in New York, Malcolm McLaren returns to London and takes care of the future Sex Pistols.

Punk made in England

The Sex Pistols were born in 1975, when Malcolm McLaren and Vivienne Westwood’s boutique adopted the name Sex. In August of the same year, John Lydon entered and auditioned in the store to hold the microphone, singing I’m Eighteen by Alice Cooper. The arrival of John Simon Ritchie, alias Sid Vicious, one of John Lydon’s friends, called at that time Johnny Rotten because of his doubtful teeth, allows the Sex Pistols to adopt its definitive form, to the great displeasure of Glen Matlock, who is fired without any qualms. Inspired by the Ramones, especially after their London concert, Alice Cooper and the New York Dolls, the Sex Pistols begin their career. This one will be of very short duration, just long enough to record an album and to give some concerts, and will explode in full flight, dynamited by his father, Malcolm McLaren.

If the legend claims that God Save the Queen was composed in reaction to the jubilee of Queen Elizabeth II, it is not true. The members of the Sex Pistols were not aware of such an event and simply wanted to pervert the real anthem of the United Kingdom to deliver a punk and anti-monarchy slur in which the country is assimilated to a fascist regime. The combo then also intended to exploit the widely shared resentment towards the monarchy to gain sympathy from the less privileged classes. Second single released by the Sex Pistols, God Save the Queen reached the second place in the charts. The expression of its refrain, “No future” having become one of the main slogans of the punk movement.

Released on the only Sex Pistols album, Nevermind the Bollocks, God Save the Queen also has a controversial cover featuring a disfigured portrait of Queen Elizabeth II. A cover designed by Jamie Reid, ranked by the 100 greatest covers of all time. In September 2022, a few hours after the announcement of the death of Elizabeth II, John Lydon, usually very virulent, paid tribute to the queen, putting aside the anger widely readable in the lyrics of his most famous song.

40 covers of God Save the Queen have been published over the years. The most famous one is Motörhead. 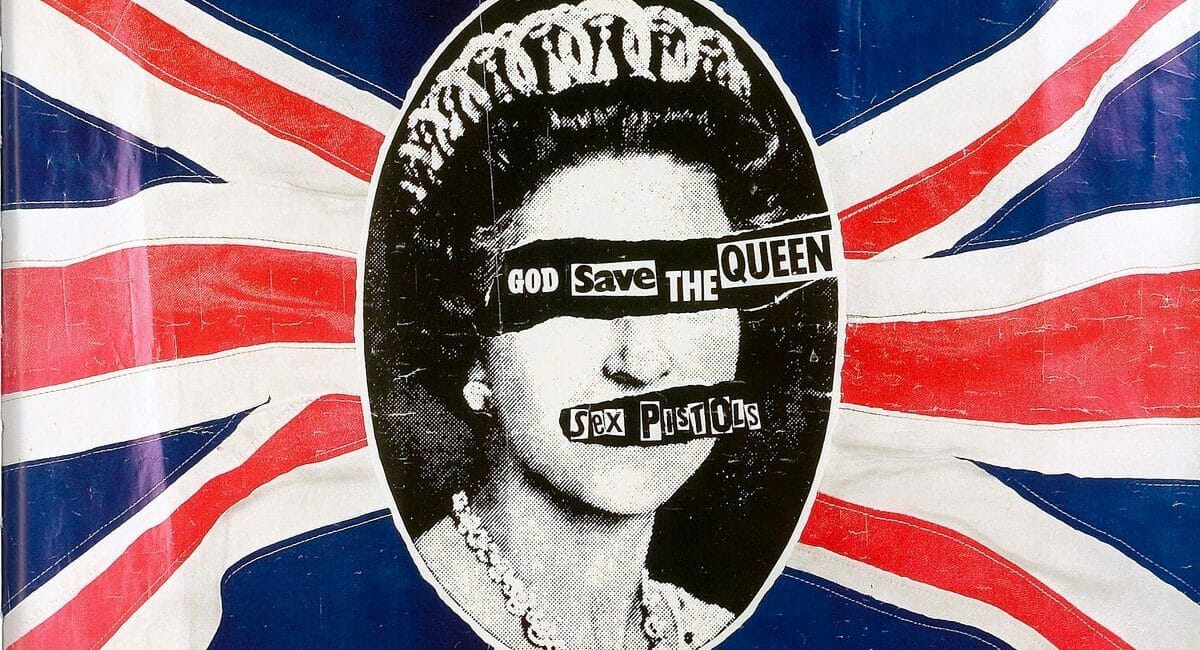 God Save the Queen

Opened in 1971 under the name Paradise Garage, by Malcolm McLaren and Vivienne Westwood, this store closed its doors in 1983.

If Malcolm McLaren and Vivienne Westwood’s store was first called Paradise Garage, it quickly adopted the name Let It Rock, before becoming Sex in 1974 after briefly being called Too Fast to Live, Too Young to Die . Malcolm McLaren wants to sell fetish clothing, in latex or leather, as well as original creations by Vivienne Westwood, in an all-black environment. After having notably employed Steve Jones, the future guitarist of the Sex Pistols and Chrissie Hynde, later brought to found the Pretenders, Sex changed its name again in 1977 to become Seditionaries. Renovated thanks to the success of the Sex Pistols, which Malcolm McLaren created in the store, the store changed to World’s End in 1980, before closing in 1988. The address now once again hosts a fashion boutique called Vivienne Westwood World’s End, recognizable thanks to its large clock on the facade.

Discover all the places God Save the Queen on our map