1983. After many moments of doubt, during which Jean-Jacques Goldman continued to work in the family store Sport 2000, the songwriter had his first success with Il suffira d’un signe, Quand la musique est bonne and Comme toi.

His committed song, his looks of rocker and his particular voice earned him many mockery by the press. Like Renaud, France Gall or Daniel Balavoine, the singer is considered as “a good Samaritan with an outdated message”. However, Comme toi holds a special place in the artist’s heart. Inspired by a photo of a little girl in her mother’s scrapbook, it tells the story of Sarah, a victim of the Holocaust.

When the time came to shoot a video clip for his song, Jean-Jacques Goldman shot two versions. One is very dark, in a black-tinted setting with only a spotlight on him, sitting on the floor and barefoot. The second under the sun of the Atlantic coast, in the heart of the island of Ré. In front of the Sainte-Catherine church, the singer tells in song the misfortunes of Sarah, a “little girl without stories and very wise” knowing an unfortunate fate.

Comme toi reached the 4th place in the IFOP France ranking in 1983.

Established as a parish on July 7, 1379, there is no written record of the exact date of construction of Église Sainte-Catherine.

Renovated in 1627, this church, already nearly 300 years old, was subsequently equipped with a sacristy, a baptismal font and extensions.

In 1793, wishing to protect the sacred objects from looters, the parish priest of the time, Oreillan, with an accomplice, stole some sacred vessels to protect them. Discovered, they were decapitated and the building became an atheist temple until 1831. Blessed on this date after the reconstruction of its roof and bell tower, the Église Sainte-Catherine resumed these functions, despite the separation of the Church from the State in 1905. It was again renovated in the 1980s and in 2008 thanks to the Fondation du Patrimoine. 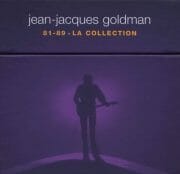 The Collection 81-89 is a box set of the French singer Jean-Jacques Goldman released in 2008, composed of five CDs, a DVD and a booklet including texts and photos.

Contents of the box

– the texts of the songs of the albums ;
– the photos of the covers of all his singles;
– a handwritten message from Jean-Jacques Goldman:
“September 2008 – Almost thirty years already… And yet all these images come back, intact: Enthusiasm, obsession, clumsiness, energy. And the incredible luck of having been heard. With so much gratitude, JJG “.

Discover all the places Comme toi on our map