Saga Avengers
Movie The Avengers Joss Whedon (2012)
During the Chitauri attack, New Yorkers took refuge in Pershing Square just across the street from Grand Central, which is also seen.

The fight rages, Loki (Tom Hiddleston) has opened a gate over the Stark Tower overlooking Grand Central. Chitauris, conquering aliens, arrive by the thousands to kill or enslave the population.

The Avengers, driven by a spirit of revenge following the murder of Agent Coulson (Clark Gregg) by Loki, tries to annihilate the threat. But civilians must be protected. Some of them are in Pershing Square.

Among them is a waitress, Beth (Ashley Johnson). This character was much more important initially, before the editing cuts.

In addition to the panic scene and her interview, she was flirting with Captain America earlier in the film in front of the Stark Tower, a sequence in which Avengers creator Stan Lee appears and prompts the superhero to ask for his number.

In a second clipped sequence, Beth was followed to try to reach a safer shelter by walking through the rubble and escaping death several times.

A fun parallel since, since 2009, Ashley Johnson has been playing Ellie in the hit video game The Last of Us.

Located on 42nd Street, under the Park Avenue viaduct, and opposite Grand Central, the Pershing Square is a former tourist office converted into a restaurant is to be discovered for its atypical setting: a chic decor with glass arcades and, on the ceiling, steel railway beams painted green like in the subway. 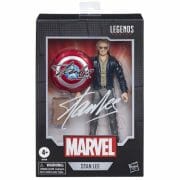 Inspired by Stan Lee during his chess cameo in the movie Avengers. With its 80-year history in the field of comics, Marvel has become a centerpiece of fan collections around the world. In the Marvel Legends Series collection, the favorite characters from Marvel comics and movies are reproduced with premium realism and high-end joints that allow them to be positioned and exhibited in any collection. From figurines to vehicles to role-playing items, the Marvel Legends Series ranges from elite character-inspired products that will appeal to fans and collectors. Other figurines sold separately. Within stocks. COLLECTIONNER FIGURE STAN LEE: Fans, collectors and children will all be able to enjoy this 6-inch-scale Stan Lee figurine inspired by the creator of the Avengers, the one and only Stan Lee DESIGN INSPIRED BY MARVEL FILMS: This Stan Lee figure has premium decoration and premium joints to position it as you want and display it in its collection Marvel ARTICULATIONS AND DECO : First-class, this 6-inch-scale Stan Lee Marvel Legends realistic figure has multiple joints and will fit into any collection of figurines. MARVEL UNIVERS IN FORMAT 15 CM: There are also other Marvel Legends Series figurines inspired by Marvel characters, such as Captain America, Iron Man, Spider-Man and Black Panther (sold separately, within stocks) INCLUT CAPTAIN AMERICA AND CHESSBOARD: The figure includes a Captain America shield with Stan Lee’s signature and a chessboard inspired by his camera Marvel’s educational value: imagine stories with its favorite superheroes. Marvel figure, the perfect toy to give as a gift for fans or children, girls and boys 4 years, 5 years, 6 years and older. Copyright 2019 MARVEL. Hasbro and all associated terms are trademarks of Hasbro. Stan Lee, the signature of Stan Lee and Excelsior! are trademarks of POW! Entertainment, LLC

Discover all the places Avengers on our map