Saga Jurassic Park
Movie Jurassic World (2015)
The new owner of Jurassic World has thought of everything: in his gigantic park, children can evolve in a safe space, in the middle of smaller and vegetarian dinosaurs. A park within a park created inside the Honolulu Zoo, not far from the natural settings of the film.

Colin Trevorrow and the film’s writers have come up with some brand new installations for Jurassic World, the expanded version of Jurassic Park. In reality, the park consists of several real places, such as the Kualoa Ranch, where Jurassic Park was already filmed, the New Orleans Zoo and the Honolulu Zoo. This is where the area of the park dedicated to the youngest visitors has been set up, where it is possible to touch real dinosaurs that are as harmless as they are adorable.

If Honolulu had been neglected by the first trilogy, this one having concentrated on the natural areas of the islands of Oahu and Kaua’i, the director Colin Trevorrow has put to use the capital of Hawaii.

Jurassic World has been the subject of strong criticism since its release for scientific errors. Indeed, experts have pointed out that it was time to show feathered dinosaurs in movies to echo the true appearance of the creatures. Colin Trevorrow defended himself by stressing that his film was not intended to be realistic. However, he will be responsible for including these species for the first time in the third installment of Jurassic World: Dominion in 2022.

Finding its origins in 1876, the Honolulu Zoo houses some 1,230 animals in specially designed spaces.

Built on land made available by King Kalakaua, this zoo has notably led to the development of marshes and ponds. During the first years, the monarch used the place to store his personal collection of birds and horses. Visitors can now adm... Learn more about Honolulu Zoo 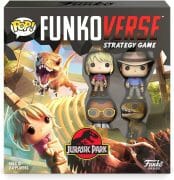 Do you think Ray Arnold and Ellie Sattler make a better team, or Alan Grant and Velociraptor? Put your guess to the test with this Jurassic Park themed base game from the Funkoverse