Movie The Blues Brothers John Landis (1980)
Director John Landis' first commercial success, The Blues Brothers has succeeded in establishing itself with equal intensity in both the film and music worlds. Populated by soulful stars and punctuated by memorable tunes, this cult film is an absolute classic. A masterpiece whose story begins behind the bars of the Joliet prison.

The shooting of the Blues Brothers begins in Chicago in July 1979 while the budget is still not closed. Luckily, the city fully supports John Landis’ team. It is notably thanks to the support of the city council and Lucy Salenger, the director of the Illinois Film Office, that the Joliet penitentiary, which was still in operation at the time, can also be operated. The introduction of the film, when Jake (John Belushi) gets out of prison, is then shot on the site, as well as the conclusion, when the two brothers perform in front of the residents in a thunderous concert. The shooting at the Joliet prison, given the rather sensitive nature of the place, goes well, with one exception. For the needs of the first scene, John Landis has to film aerial views of the establishment. The plans are made from a helicopter. Among the guards, some have not been warned and think that an escape attempt will take place. Fortunately, just as some employees were almost considering shooting the aircraft on sight, the situation was clarified in time.

The production of the Blues Brothers was not easy. At the time, John Belushi, one of the driving forces behind Saturday Night Live, was living the life of a rock star. In order to meet his expectations, an envelope is even provided to meet his cocaine needs. A bar is built for the actors. The employees are in charge of restocking them with various drugs, as Carrie Fisher, then in couple with Dan Aykroyd, will tell it later. In the streets of Chicago, John Landis organizes wild chases that are sure to be remembered. Always with the support of the town hall, he managed to block the city center, in the morning and during the weekends. ” We were driving at 110 miles per hour, it was amazing”, the filmmaker later recalled. Never before had anyone filmed such a spectacular sequence in the city. The team is even allowed to project the Bluesmobile through the Daley Center lobby, but in the end, special glass is installed to prevent damage to the building. The shooting still causes various damages.

In total, the production destroys sixty police cars, purchased for $400 each, and operates thirteen different versions of the Bluesmobile. About 40 stuntmen work on the film and a body shop is even created to repair the vehicles as they go along. The filming was punctuated by the antics of John Belushi, and was of course marked by a constant parade of stars, including Aretha Franklin, James Brown, Steven Spielberg, John Lee Hooker, Joe Walsh and Ray Charles.

Built entirely around a cult duo created by John Belushi and his friend Dan Aykroyd on Saturday Night Live, The Blues Brothers grossed $115 million at the box office. The soundtrack has sold 3.5 million albums.

Dan Aykroyd wrote a first draft of the script with 384 pages, which is about three times more than a classic script. He had fun sending it to producer Bob Weiss wrapped in Yellow Pages coverage. 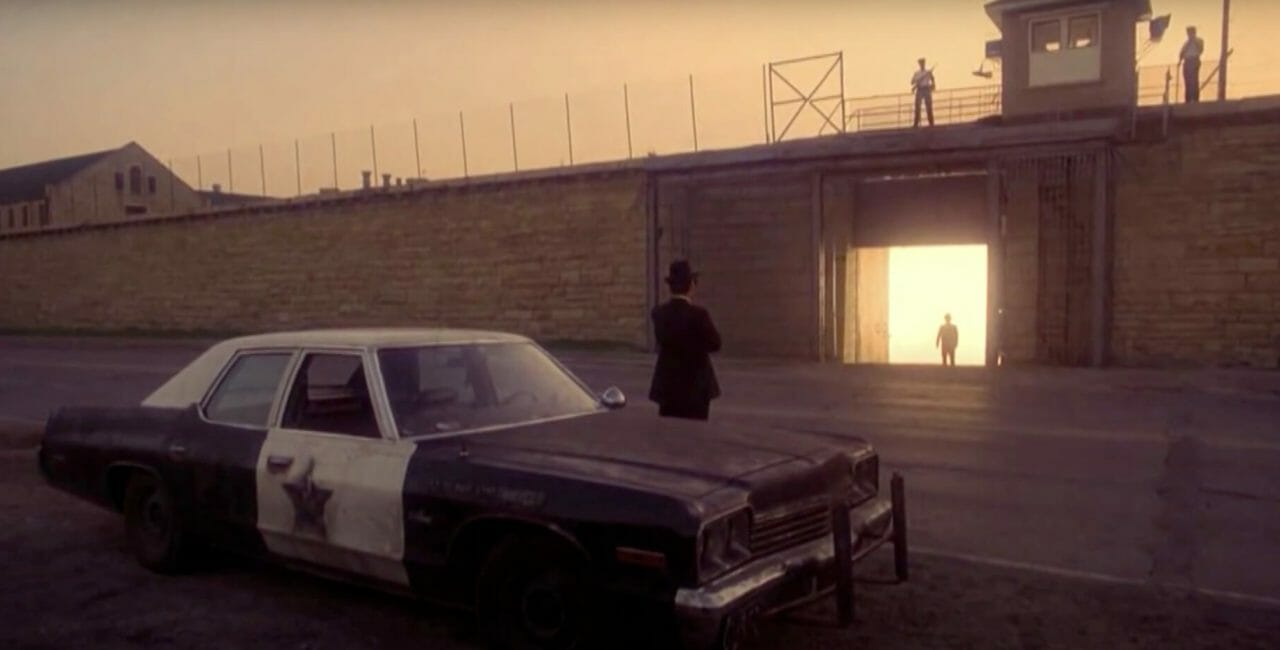 Scene in front of the Old Joliet Prison in The Blues Brothers – Credit: Universal Pictures

Built in 1958 on the site of the former Alton Prison, Joliet Penitentiary overlooks the Mississippi River.

Designed by the American architect William W. Boyington, the Joliet prison adopts a most impressive gothic style. Built with Joliet limestone, by prisoners brought there, the building soon beats the record of inmates with its 1239 occupants. Criticized for its dilapidated nature, the penitentiary was gradually modernized but remained feared for its very difficult living conditions. In 2002, the degradation of the structure and budget cuts sealed its fate and the prison closed its doors. It is also known for having hosted the serial killer John Wayne Gacy as well as the filming of the series Prison Break.

Discover all the places The Blues Brothers on our map