TV show Uncoupled (2022)
For many years, Michael and Colin were very happy in their Manhattan apartment. Until their abrupt breakup.

Long before Colin’s (Tuc Watkins) disastrous fiftieth birthday party, he and Michael (Neil Patrick Harris) were living happily in their apartment at 44 Gramercy Park. When Colin leaves the marital home, Michael is left alone but wants to keep the apartment.

Much later, when he takes on his demanding client Claire Lewis (Marcia Gay Harden), Michael has no idea that she will soon become his neighbor. Colin’s departure also allows Michael to get closer to his neighbor Jack (André De Shields), who gives him a great opportunity for his work.

In order for the show to be credible, Netflix relied on the choice of the different places where the characters live, especially Michael, since he specializes in selling goods in Manhattan. The head designer, Ray Kluga, was faced with a real challenge in finding the rare gems.

As for Michael and Colin’s apartment, Ray Kluga stopped by 44 Gramercy Park. The old and very distinguished side of the building recalled an old and romanticized New York in the style of the 1920’s-1930’s which pleased the decorator very much. The terrace, the double-height living room, the high ceilings, the natural light and the parquet floor have all contributed to make the apartment the couple’s home.

Michael and Colin are separating after seventeen years together. 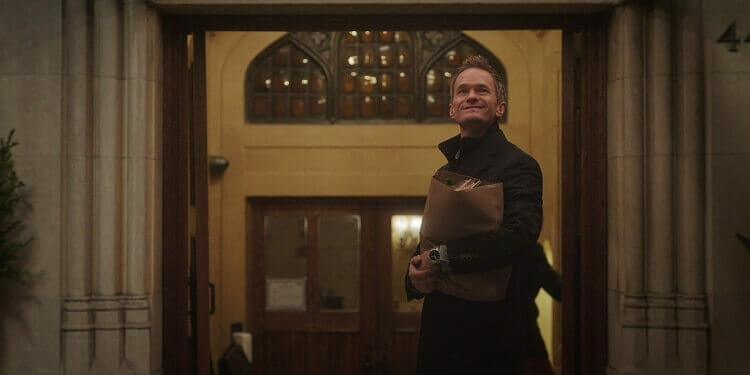 The architectural firm of Schwartz and Gross didn’t skimp on the building’s Gothic Revival details, including a limestone arch, brickwork and casement windows.

In addition to the benefits of living close to the hustle and bustle of Manhattan, the building has a doorman, laundry room and multiple elevators.

It costs about $1.3 million for a two-bedroom, one-bathroom apartment or $5,500 a month for an 80-square-foot rental.

Decorate your walls with this poster inspired by the TV show The Boys! A perfect pop decoration for all fans of the trashy superhero series.

Discover all the places Uncoupled on our map