Movie Leon: The Professional Luc Besson (1994)
The most famous hitman in French cinema, Leon lives in a Manhattan apartment two blocks from Central Park and 5th Avenue. A character sketched by Luc Besson in Nikita, becoming the pivot of a New York adventure as violent as it is touching...

If it is indeed the building of 71 East 97th Street, at the corner of Park Avenue that Luc Besson used to represent the exterior of the building in which Léon lives, the interiors were shot in the mythical Chelsea Hotel. The Chelsea is one of the most mythical establishments in New York, which gives the film a special cachet. Here, where poets, directors, artists, actors and rock stars, from Jack Kerouac to Janis Joplin, Simone de Beauvoir and Leonard Cohen, have all taken refuge. The Canadian musician even paid tribute to the place in Chelsea Hotel #2, one of his most famous songs, in which he recounts his meeting with Janis Joplin…

The most New York of French films, Leon made use of several locations in the city, although many of the sequences taking place indoors were shot at the Éclair studios in Épinay-sur-Seine. Leon , where 12-year-old Natalie Portman made her film debut. And so much for Liv Tyler, who Besson had in mind when writing the script. Natalie Portman’s parents weren’t particularly thrilled with the nature of their daughter’s role, however, as the young actress plays Mathilda, an abused child who takes refuge in the home of this mysterious tenant with small round glasses. A man of few words played by Jean Reno, a close friend of Luc Besson’s who already starred in Dernier Combat, the director’s first film. Telling the story of how a hitman finds himself having to defend a young girl against fearsome gangsters led by Gary Oldman, Leon, one of Luc Besson’s greatest successes, was, by his own admission, mainly inspired by New York.

Another detail weighed in when it came to choosing the city in which his killer would operate. “We couldn’t shoot Leon in Paris because in France, in every building, you have a concierge. And a concierge knows everything that’s going on and is in cahoots with the police“Luc Besson recalled in the pages of Stumped magazine, justifying his choice. Leon is his first feature film to be set in the United States and remains one of his most popular films with Americans. Despite the years, Leon’ s New York neighborhood, and in particular the building at 71 East 97th Street, is still very recognizable. So much so that one would almost expect to see the kind-hearted killer come out and head for the now closed grocery store on the corner. The neighbourhood has regained its calm since that day of filming, when, in front of the profusion of extras disguised as policemen, a real robber decided to hand himself over to one of them.

The director’s cut version of Leon is 26 minutes longer and therefore reaches 136 minutes. 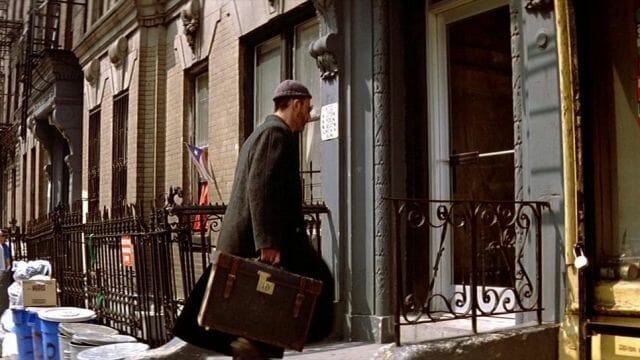 Immortalized by Luc Besson’s camera, this building located at 71 E 97th St is one of the celebrities of the Carnegie Hill district…

Built in 1920, this building has six floors and includes twenty-five apartments. Typical of Manhattan, recognizable thanks to its iconic metal fire escapes, it is located a few meters from the emblematic 5th Avenue and the Jacqueline Kennedy Onassis Reservoir in Central Park.

Discover all the places Leon: The Professional on our map