Fanspot
Land of the Harfoots

TV show The Rings of Power (2022)
Ancestors of the Hobbits, the Harfoots are part of the inhabitants of Middle-Earth while this one has just known a terrible battle against Morgoth and Sauron. While Sauron regains strength in the shadows, this peaceful and benevolent people of gatherers evolve in the shadow of men in a land located in Denize Bluffs, New Zealand.

Like Peter Jackson in his time, the producers of the Rings of Power, the series telling a story set 7000 years before that of Frondon, Gandalf, Aragorn, Gimli and Legolas, wanted to anchor their story in the magical lands of New Zealand. And like the famous director, they have notably exploited the Denize Bluffs farm, where the troll forest was located in the first trilogy.

The Harfoots in New Zealand

Offering an abundance of diverse landscapes, Denize Bluffs once again hosted the production of a work inspired by the writings of J. R. R. Tolkien. The decorators were careful not to alter the landscape too much to include the rudimentary dwellings of the Harfoots people. Very similar to the Hobbits, of which they are the ancestors, these small beings with hairy feet live in huts under trees and use nature to hide from the eyes of men. The challenge for the decorators was to give birth to the houses and other makeshift dwellings imagined by J. R. R. Tolkien in his famous books.

Peter Jackson removed from the project

While there was initially talk of him getting involved as a producer or consultant in Rings of Power, Peter Jackson was eventually kept out of the creative process. Eager to help the producers orchestrate this highly anticipated return to Middle Earth, the New Zealand filmmaker did not fail to express his incomprehension in the media following the refusal of Amazon, the company producing the show, to accept his help, however small it might have been.

The most expensive series in history, The Rings of Power cost more than 1 billion euros. 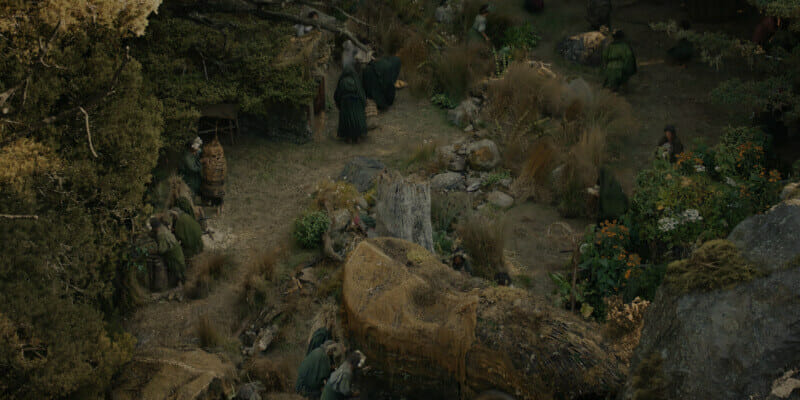 Popularized around the world thanks to the Lord of the Rings franchise, this farm now welcomes many tourists.

Comprised of dramatic limestone cliffs, pristine native forest and verdant plains, Denize Bluffs is one of New Zealand’s best-known natural treasures. It is in particular here that Peter Jackson located the forest of Trollshaws, the residence of Radagast or the cave containing the treasure of the trolls. It is also on these lands that Gandalf offers his sword to Bilbo.

Replica of the One Ring

Get the power of the One Ring forged by Sauron with this all-gold replica of the precious.

Discover all the places The Rings of Power on our map