The fact that the extraordinary journey of the young Harry Potter really starts on the platforms of the King’s Cross station in London is not a coincidence. Back in 1990… J.K. Rowling boards the train in Manchester, towards the capital, where she lives. The journey seems interminable. It took her nearly four hours to reach London. But the long journey inspires her. As she watches the landscape pass by through the window, her mind wanders. She imagines a young, skinny boy with glasses and black hair discovering one day that he is a wizard. His adventures would of course use a magic train and take place in the English countryside. The future author is looking for a pen, but none of them work. Too shy to ask another passage for one, she resigns herself and keeps thinking. Soon, she is teeming with ideas and can’t wait to get them down on paper. When she returned home, she started writing. Thus was born the Harry Potter saga.

J.K. Rowling chooses King’s Cross Station as the starting point for her adventure of good and evil wizards. His choice is not a random one. Indeed, if Harry Potter came into the world on a train from Manchester to London, the author finds her own origin in King’s Cross because it is here that her parents met. A nice wink in short. Coincidentally, legend has it that the former British Queen Boadicea is buried on the site of piers eight to ten at King’s Cross. If many fans think that this is why the writer chose this location, she has always defended herself by reminding that she was not aware of this story at the time of the conception of Harry Potter. It doesn’t matter, because it is here that she decided to organize the meeting between Ron Weasley, played on screen by Rupert Grint, and Harry Potter, played by Daniel Radcliffe. The actual platform 9 and 10 are unfortunately located away from the original Victorian building and don’t quite have the magical appeal one would imagine. So numbers 4 and 5 were chosen to replace them and allow Harry’s transition to his mysterious and fantastic future. Unfortunately, you can’t go to the docks unless you have a ticket. However, you can always make up for it by standing by the trolley next to The Harry Potter Shop at Platform 9 3/4.

Many directors were considered for the adaptation of the saga to the cinema. Among them are Steven Spielberg and Terry Gilliam. The latter was J.K. Rowling’s first and only choice, but Warner, who owned the rights, ended up imposing Chris Columbus. After his experience with Mrs Doubtfire and Home Alone, the director wanted to distance himself from Hollywood but finally accepted the proposal. On March 29, 2000, in an effort to respect the author’s work, the director flew to London and met J.K. Rowling at King’s Cross. After several hours of discussion, during which he asked many questions about the Harry Potter universe, an agreement was reached and production began. In addition, the novelist was able to get the final say on the adaptation’s script. In order to avoid the crowds, the technical team decided to invest in King’s Cross on a Sunday. The beginning of the shooting is relatively calm, until some passengers notice the cameras and especially a certain train. “We had pulled the real Hogwarts Express onto the platform’s tracks, and had replaced the sign with the one for Platform Nine and Three-Quarters. There was a tremendous amount of visitors that day who couldn’t believe they were actually seeing the train at King’s Cross station.” the filmmaker would recall years later in the book Harry Potter: Film Vault. The crews return to the site for the filming of Harry Potter and the Chamber of Secrets, Harry Potter and the Prisoner of Azkaban, Harry Potter and the Order of the Phoenix and for the final scene of Harry Potter and the Deathly Hallows part 2. The latter saw the iconic train return to the rails to the delight of fans.

Since then, King’s Cross Station has become one of London’s pop culture hotspots. Every day, fans of the films and books flock to the doors of the store, where hundreds of merchandise items are available, and have their photos taken in front of the inevitable cart built into the wall. Even years after the end of the saga, the plebiscite of which it is the object does not weaken, quite the contrary. The magic of Harry Potter is still in the air. And not just between platforms 9 and 10 but throughout the station and beyond.

The Hogwarts Express is actually locomotive 5972 Olton Hall built in 1937. It was first equipped with four British Rail cars Mark 1 and then another was added.

The very first King’s Cross station opened in 1850 in the Midland Goods Shed, not far from the present location.

Among the first illustrious travelers, Queen Victoria passed through this station on her way to Scotland in 1851. A year later, the place was inaugurated. The original roof was inspired by the stables of the Russian Tsars.

Initially equipped with two platforms, the station was expanded over the years. It now has 11 platforms. Surprisingly, they are numbered from 0 to 10. When the decision was made to create the eleventh platform, the only available space was next to platform number 1.

Rather than renumber everything, or name it “Platform Y” as it was intended, the number 0 was chosen. 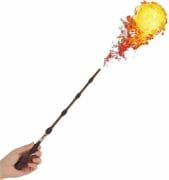 Become a real wizard with this wand allowing you to perform the spell “incendio”. Beware this wand really spits fire, it is not suitable for children and muggles.

Discover all the places Harry Potter on our map