TV show Stranger Things Matt Duffer and Ross Duffer (2016)
Vecna, a powerful creature from the Upside-Down, attacks Hawkins high school students. A terrifying monster capable of bewitching its victims, whose story seems to be linked to that of Victor Creel (Robert Englund), a mysterious individual who lived in a disquieting house in the Hawkins area. House actually located in Rome in the state of Georgia.

As one of the main sets for Stranger Things season 4, Victor Creel’s house gave the actors the opportunity to shoot inside the Claremont House, a former bed & breakfast in Rome, a small town in the state of Georgia. Victorian Gothic in style, the building is perfect for housing the source of the evil being at the center of the series’ plot.

For the purposes of filming, the Duffer brothers, the showrunners, first shoot flashback sequences in the house as it appears in reality, beautifully painted and set in a remarkably well-kept park. Later, after telling the origin of Vecna, the terrible creature of the Upside-Down, the directors return to the present time and make up the house to give it a much more disturbing aspect, in the purest tradition of American horror films of the 1970s / 1980s. The paint appears chipped and faded, the doors and windows are barricaded and cobwebs are added everywhere. Very impressive, the manor house now takes place in a dilapidated environment of the most beautiful effect.

Belong to the Hellfire Club with the official member’s t-shirt. The must-have item of clothing for Stranger Things fans.

However, as is often the case in this scenario, the sequences that are supposed to take place indoors are shot in a studio, on several levels. A real star of season 4, Victor Creel’s house also has its version in the Upside-Down where it is literally cut into pieces to illustrate Vecna’s perfidy. Season 4 of Stranger Things was shot under the seal of secrecy. The code name chosen by the Duffer brothers? M247 Mule. An affirmed reference to one of the villains of the Stephen King movie Maximum Overdrive. Of course, season 4 also gives a nod to Freddy Krueger, the iconic character created by Wes Craven in A Nightmare on Elm Street, whom Vecna closely resembles. Robert Englund, the legendary interpreter of the steel-clawed killer, also makes a notable appearance as Victor Creel.

The ninth episode of Stranger Things season 4 is the longest of the entire series. It lasts 150 minutes. 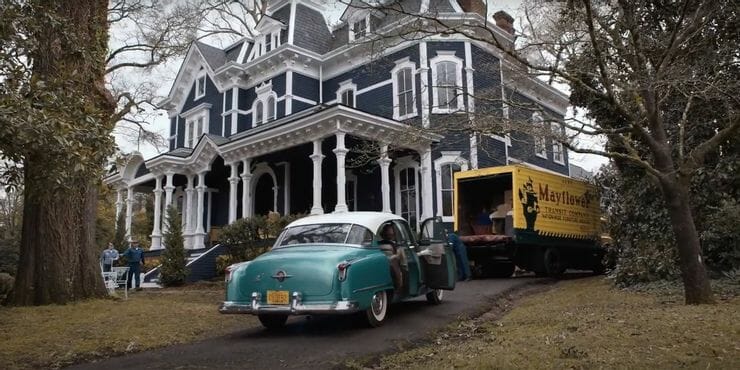 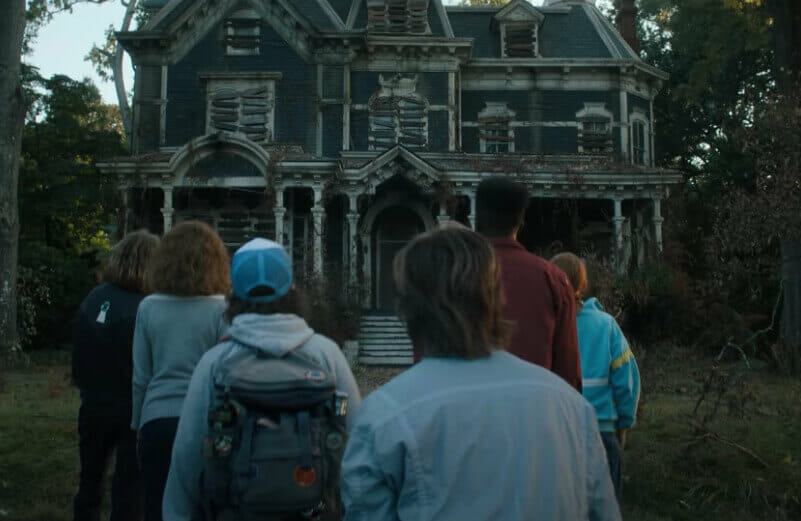 This former bed & breakfast is located near Grizzard Park, not far from downtown Rome in the state of Georgia.

Claremont House in Rome was built in 1882 for Colonel Hamilton Yancey and his family. With six bedrooms and seven bathrooms, offering a large lot and nicely furnished with period furniture including many antiques, it becomes a bed & breakfast. Its Victorian Gothic architectural style delights visitors. In 2019, the owners decide to close shop. The Claremont House is then put up for sale for just under $500,000. It appears in particular in the credits of season 4 of the series Stranger Things.

Listen to the Stranger Things 4 soundtrack like Max with this audio cassette including “Running Up That Hill (A Deal with God)” by Kate Bush. The perfect item to get into the mood!