TV show The Crown (2016)
Prince Charles (Josh O'Connor) and Diana Spencer (Emma Corrin) move into Highgrove, a beautiful country home owned by the royal family. A place whose doors remained closed for the production of The Crown. The latter having fallen back on Somerley House.

Highgrove, the official residence of Prince Charles (Josh O’Connor), appears in The Crown as he comes of age to marry Diana Spencer (Emma Corrin). Unable to film all the planned sequences, Peter Morgan chose Somerley House, whose architecture evokes Highgrove.

The setting for Charles and Diana’s complicated relationship, Highgrove is also the scene of one of the most powerful scenes in Season 4, when Elizabeth II (Olivia Colman) visits her son and he gives her a tour of her home, lingering over its beautiful gardens.

A prince at the microphone

Josh O’Connor was praised for his performance. The actor confided to Madame Le Figaro about his common points with Prince Charles: “I guess we have the same ears. On a more serious note, I don’t think we have much in common, although he loves to garden, as do I. I suppose I also see myself in his commitment to the environment. If people say I’m a long way from Prince Charles, I think I’ll survive. I always thought it wasn’t my job as an actor to be his perfect replica. It’s not what I’ve been asked to do. Emma’s interpretation, for example, goes way beyond what Diana really was, and that’s good, it wouldn’t be very interesting otherwise.”

The Crown is only the third series in which Emma Corrin appears after Grantchester and Pennyworth. 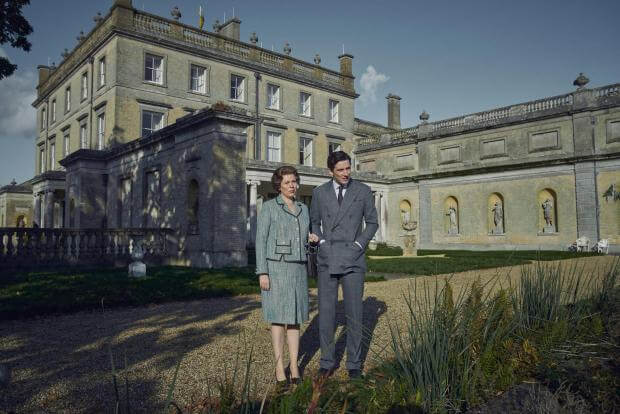 But a Grade II country estate, Somerley House sits smack in the middle of almost 3,000 hectares of land.

Home to the seventh Earl of Normanton, Somerley House was designed by British architect Samuel Wyatt. Also inhabited by the family of Lord Normanton in 1825, it houses a magnificent gallery of portraits, several paintings and various works of art. Available for hire, for stays or celebrations, it appears in the credits of series such as The Crown and Bridgerton.