In New York, Reitman mainly films the exteriors, while the interiors are shot in Los Angeles. Like for example the first supernatural confrontation in the New York Public Library and of course the sequences supposed to take place inside the Ghostbusters Firehouse where Venkman, Stantz, Spengler and Zeddemore settle. These take place in reality in a disused barracks in Los Angeles…

It was Dan Aykryod, a Tribeca pet, who was owed their fame by the firefighters at Hook and Ladder Company 8. The actor has always loved the look of the building. This was also operated in the second part, again as the Ghostbusters Firehouse. 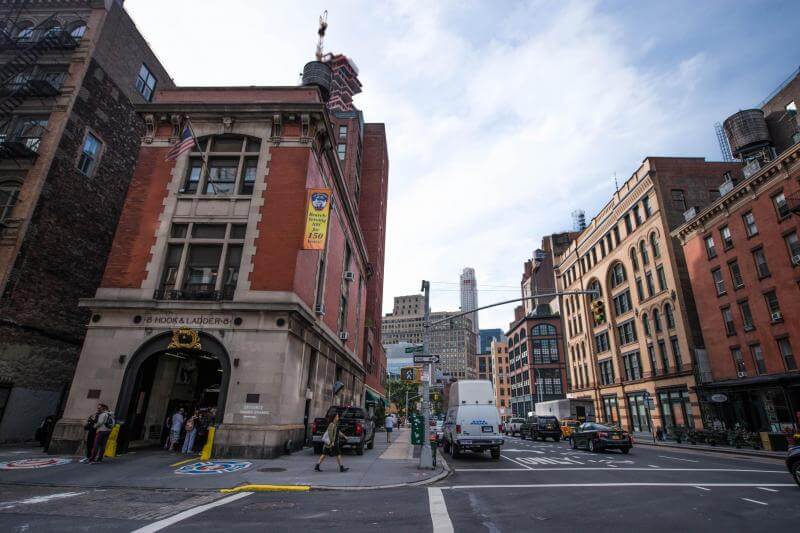 And it is the sign of the suite that the firefighters hung prominently inside while on the sidewalk are drawings making the link between the place and the film.

On September 11, 2001, the barracks was among the first to operate on the Site of the World Trade Center. Still in operation, renovated in 2018, it continues to attract fans from all over the world. And it’s not going to stop…

That’s the dollar amount for the building’s monthly rent when ghost hunters from the 2016 remake see the barracks as their headquarters.

The emblematic Ghostbusters building, FDNY Ladder 8, has become a place of pilgrimage for fans. References to the film are numerous, both on the pavement and inside, and the firemen have become accustomed to posing with tourists.

Completed in 1903, it was the first fine arts style barracks in New York City.

On September 11, 2001, the barracks were among the first to intervene on the World Trade Center site.

Still in operation, renovated in 2018, it continues to attract fans from around the world. And it’s not about to stop…

Something strange in your neighborhood? Call the Ghostbusters™ Firehouse! Here you will find Spengler mixing up his current ghost-fighting mixture in the lab, Stantz keeping a close watch on the Library Ghost, and Janine answering all your ghostbusting calls. When the call comes in, watch them race into action sliding down the fire pole to the garage. Here, the Ecto-1 (9220 – sold separately) can be parked inside for even more ghoulish action. And don’t forget to lock up all ghosts in the Ghost Containment Unit. This set is packed with plenty of accessories for hunting down ghosts, including a detachable proton pack and proton laser, ghost trap, PKE meter for measuring psychokinetic energy, silicone slime splatters that stick to smooth surfaces, and more! Recommended for ages six years and up. Dimensions: 17.7 x 10.8 x 17.9 in (LxWxH).Warning. Choking Hazard. Small parts. Not for children under 3 years.
Text: Playmobil.us
Buy at the best price on: