After destroying a secret base of a Mexican drug lord, James Bond takes a few days vacation at Fontainebleau Miami Beach.

In the middle of a massage session, James Bond is interrupted by his old friend Félix Leiter (Cec Linder). The CIA agent has a message of the utmost importance to him. M, the boss of 007 in London, gives him a mission; to keep an eye on Auric Goldfinger (Gert Fröbe), an industrialist obsessed with gold.

James Bond bypassed the businessman, then in the middle of a card game by the pool, by going to his hotel room and preventing his secretary Jill Masterson (Shirley Eaton), equipped with binoculars and a radio, from transmitting his opponent’s game to his boss.

Amused by the scene, Jill succumbs to the charms of 007 and goes to her room to consummate the relationship. Unfortunately, her boss, not having enjoyed being ridiculed, sends his henchman Oddjob (Harold Sakata) to knock out the secret agent, completely covering his former employee with gold paint to asphyxiate and kill her.

James Bond then interrupts his vacation to go to London and confuses Goldfinger.

In reality, neither Sean Connery nor Gert Fröbe shot these scenes at the Fontainebleau Miami Beach. Only Cec Linder went there with a second film crew. Sets were recreated in the Pinewood studio for the famous pool scene.

It took the make-up artists two hours to paint Shirley Eaton, Jill Masterson’s interpreter, in gold. She took even more time to clean herself and had to multiply Turkish baths to extract the paint from the pores of her skin. To avoid asphyxiation, a large part of the stomach has not been painted.

Built in a curved shape to capture all the freshness of the ocean, the hotel boasts a prime location.

Quickly becoming a glamorous and luxurious resort, the Fontainebleau Miami Beach has brought the biggest names in the business and has seen talented artists such as Frank Sinatra and Elvis Presley perform on its grounds.

In 2008, the complex was classified by the American National Monuments Center. 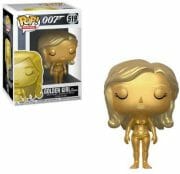