TV show The Boys (2019)
The Federal Bureau of Superhuman Affairs is responsible for apprehending supers who abuse their status.

Following the scandal of the revelations of Stormfront’s Nazi motivations, a government agency, the Federal Bureau of Superhuman Affairs (FBSA), was opened by the White House, with Victoria Neuman (Claudia Doumit) acting as director. FBSA’s objective is to apprehend supers who abuse their position.

Hughie (Jack Quaid) decides to join the office in order to defeat Vought the “right way.” His position allows him to be a liaison with the Boys who work as a subcontractor for the FBSA.

The office is not located in New York as the series would have us believe. In reality, the visible building is the one located at 155 University Avenue in Toronto.

Season 3 begins with a parody of Marvel/DC movies where we see the Seven confronting Stormfront, here played by Charlize Theron. But the funny thing here is that the actress also made a cameo in the movie Doctor Strange in the Multiverse of Madness , which was released a few weeks earlier. ” I had already made my cameo in The Boys.when I said yes to Marvel. I was very transparent with them. But that wasn’t a problem either. They thought it was great! Because The Boys is a satire. I think there’s room for everything. It just means that people are interested in these kinds of worlds right now.” said the actress during the big night for her charity Africa Outreach Project.

Season 3 of The Boys offers an incredible sequence where Termite (Brett Geddes) infiltrates his lover’s urethra. The sequence was shot on a real set in a fake penis of 9 meters long and 3 meters high built especially for the shooting.

Built in 1968, this building located just steps away from the Osgoode subway station houses 188,165 rooms that can be used as offices. Its modernist concrete and glass design blends seamlessly into downtown Toronto. 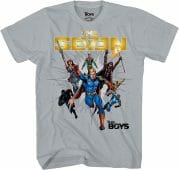 Big fan of the Seven? Show your support for the greatest team in superheroes with this officially licensed The Boys shirt. Available in multiple sizes !