Movie Man on the Moon Miloš Forman (1999)
The Ed Sullivan Theater is probably the most famous venue since the 1950s. From the Beatles to Eminem and from The Doors to Elvis Presley, they all stopped by. Including the comedian Andy Kaufman, who is mentioned in Miloš Forman's biopic, Man on the Moon...

Andy Kaufman, a comedian famous for his gallery of whimsical characters, has more than once been hosted by David Letterman, in his famous Late Show produced from the Ed Sullivan Theater. When he sat in the guest chair on July 28, 1982, it was not the first time he had visited the studios and it would not be the last. Nevertheless, it is this appearance that everyone will remember. On the set, Kaufman once again faces Jerry Lawler, a famous wrestler. A champion who has just faced the comedian in the ring after an umpteenth provocation of the latter, shortly before. A match in which he performed the sledgehammer hold on Andy Kaufman and the comedian emerged with an allegedly broken neck.

At the Ed Sullivan Theater, the comedian, wearing a neck brace, continues to titillate Jerry Lawler. Unable to control himself, the wrestler soon slapped him. A series of threats from Kaufman follow… A scene brilliantly replayed in the film Man of the Moon, in which the real Jerry Lawler and David Letterman participated, with Jim Carrey playing the role of Andy Kaufman. A character who, according to the actor, as he relates in the documentary Jim and Andy, really took possession of his mind and body during the whole shooting. It was enough to disturb his playing partners, even if, in the end, Jim Carrey was only paying tribute to the character of this total artist who never stopped blurring the lines throughout his career.

Jerry Lawler later came back in his autobiography on this rivalry, assuring that everything was played out… A landmark episode in the “life” of the Ed Sullivan Theater, the Broadway venue opened in 1927 and is most famous for the Ed Sullivan Show. It was here that the Beatles gave their first performance on American television. It was on this mythical stage that Elvis Presley shone during three anthology performances and that the Doors refused to change the lyrics of Light My Fire, judged provocative by the conservative Ed Sullivan. A moment told by Oliver Stone in the biopic The Doors. In addition to this legendary show, the place has also hosted several successful game shows, produced by Ed Sullivan. CBS later filmed the Late Show with David Letterman there, until 2015, and then the Late Show with Stephen Colbert. In the meantime, thousands of spectators have been able to sit on its bleachers to attend shows of all kinds and participate, in a way, in the history of this mythical place. 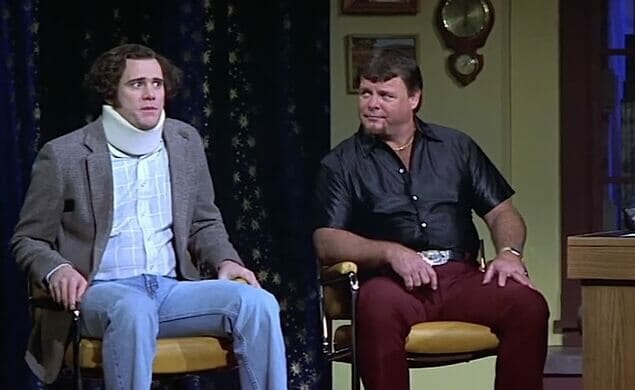 Opened on November 30, 1927, New York’s Ed Sullivan Theater has played host to some of the world’s greatest names and as such holds a prominent place in popular culture.

The theater has had several names throughout its history. It was in 1967 that it acquired its current identity, as a tribute to Ed Sullivan, the legendary hos... Learn more about Ed Sullivan Theater

Discover all the places Man on the Moon on our map