Wanting to learn more about Rebecca Butcher, Homelander (Antony Starr) meets a former Vought scientist at his home – Jonah Vogelbaum (John Doman). The latter was the scientist in charge of John, before he became Homelander.

After their greetings in the garden, the two men go inside the mansion. Jonah Vogelbaum will then explain what happened to Rebecca Butcher.

The mansion is the Parkwood Estate Oshawa, a beautiful house that has been used for the filming of other superheroic productions such as the X-Men movies or Umbrella Academy.

Homelander’s costume is a real strain on its actor Antony Starr. To avoid overheating, the suit is equipped with a cooling system. This practice is very familiar to the Marvel superhero actors. ” Actually, it’s pretty functional and it works pretty well,” the actor told Entertainment Tonight, before adding, “But the problem is the battery pack has a noisy motor, so we’ve got to take it off when we’re shooting.”

Vought has over 200 superheroes across the United States.

Built in 1917 by the famous architectural firm of Darling and Pearson, the residence was home to the McLaughlin family from 1917 until 1972. The mansion is composed of 55 rooms spread over 1,400 m2 and 3 floors. The mansion is located in the middle of beautiful gardens, of English and European reference.
After the departure of the family, the government designated the estate as a National Historic Site in 1989, opening it to the public.
In addition to being the former home of the founder of General Motors Canada, the estate is also known for having hosted numerous film shoots. Productions of The Expanse, Star Trek and even X-Men have come to set their cameras. 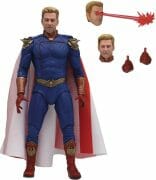 Articulated figure of the Homelander

Want to recreate the adventures of the Homelander? Here is an official articulated figure of the greatest superhero. Cape to fly, laser eyes, super strength and toes! No other figure can transcribe the arrogance and violence of the Homelander!