Movie Jurassic Park Steven Spielberg (1993)
While Ellie Sattler (Laura Dern) tries to restore power to the park, Alan Grant (Sam Neill) finds a dinosaur nest and realizes that the dinosaurs, contrary to what John Hammond (Richard Attenborough) has claimed, can reproduce. Two sequences that Steven Spielberg shot in one and the same place, namely the Allerton Garden in Kaua'i.

There is no shortage of wild places on Kaua’i. Present on the Hawaiian archipelago to shoot a majority of the outdoor scenes of Jurassic ParkHowever, Steven Spielberg chose a safer sanctuary than the jungle to film the scenes in which Laura Dern’s character tries to restore electricity in the park and Sam Neill’s character discovers the dinosaur eggs in the Allerton Garden, a branch of the National Tropical Botanical Garden.

This botanical garden offers all the necessary comfort to organize the production of a film but also allows to enjoy a very credible environment. At this point in the scenario, the action takes place in a remote area of the park, where the dinosaurs are almost free. The important thing is that nothing can betray the true nature of the place on the screen. A place where even today, visitors may hope to find dinosaur eggs.

The sequence of the discovery of the eggs translates wonderfully well Steven Spielberg’s fascination for dinosaurs. A fascination at the source of the project itself, about which he expressed himself on the site of the Director Guild of America: “I think that when I read Michael Crichton’s book, I thought of Jaws and Duel . But anyway, I always wanted to make a dinosaur movie because of my great admiration for Ray Harryhausen.“

Jurassic Park was the first film in history to exceed $900 million in box office receipts. 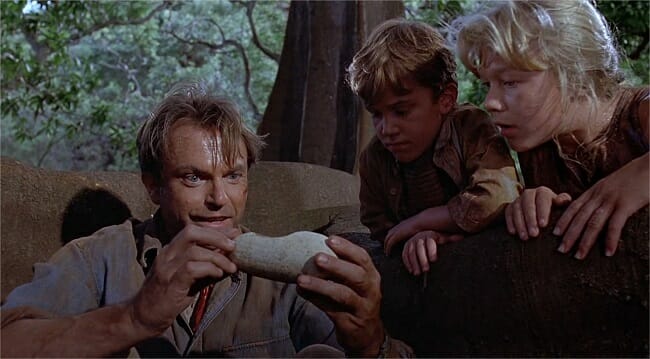 The National Tropical Botanical Garden is a Hawaiian institution dedicated to the conservation and cultivation of tropical plants.

Created in 1964, this place is part of a network of American gardens spread across the country. Devoted to the conservation and study of plants, it presents several collections over four sites spread over the ... Learn more about Allerton Garden