TV show Better Call Saul (2015)
Jimmy McGill (Bob Odenkirk), a galley lawyer, rents a tiny office in the back of a beauty salon. Allowing himself a footbath from time to time, when the store is closed, he dreams of better days while scaffolding his plans from his tiny study. All the scenes were shot in a real beauty salon in Albuquerque.

Like Breaking Bad, from which it is derived, Better Call Saul, centered on the character of attorney Saul Goodman (Bob Odenkirk), is shot exclusively in Albuquerque, in a majority of real locations. The Day Spa & Nail salon, where the main character has her study, is no exception. A way for the showrunners Peter Gould and Vince Gilligan to give a maximum of authenticity to the show but also to contribute to the local economy.

The production teams collaborated with the real owners of the Day Spa & Nail, operating both the exterior and the interior of the store. A setting that has remained unchanged, where it is possible to immerse yourself in the unique atmosphere of the series while having your nails done. On the other hand, it is better not to expect to meet Saul Goodman between these walls. The latter, faithful to his habits, has long since gone off on a tangent.

The location was first spotted by fans during the promotional campaign for the series at the time of its launch. A visual showed matchbooks with Jimmy McGill’s name and office address on them. Address corresponding to the beauty salon Day Spa & Nail. A detail that did not fail to intrigue fans before the airing of the first episode.

Better Call Saul has 6 seasons, one more than Breaking Bad. 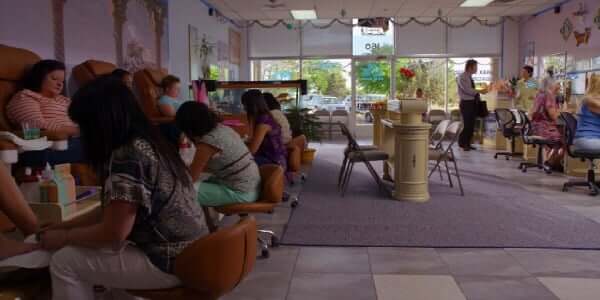 This beauty salon, which became world famous thanks to the series Better Call Saul, is located in a small shopping center.

On the far east side of downtown Albuquerque, not far from the South Sandia Peak area, Day Spa & Nail offers a multitude of body treatments. It is also a busy nail salon. The place is located not far from the National Museum of Nuclear Science & History but also from the inevitable Tijeras Arroyo Golf Course. The beauty salon can count among its neighbors an Asian restaurant, a Baptist church and a billiard club.