TV show Cobra Kai (2018)
Spin-off series of the cult film Karate Kid, Cobra Kai also takes place in Los Angeles. The production nevertheless relocated a large part of the shooting to Georgia. And so the legendary Cobra Kai dojo, once located at 5223 Lankershim Boulevard in North Hollywood, "moved" to a shopping center in Atlanta.

For the showrunners Josh Heald, Hayden Schlossberg and Jon Hurwitz, it is quickly obvious that the original location of the dojo, used in the first film directed by John G. Avildsen, is no longer feasible. Now occupied by a fitness club, the address no longer corresponds to the visual identity desired by the production.

In Atlanta, the trio chose an empty space in the Crossroads Shopping Center, not far from downtown. Not only is the location available, but it also offers the opportunity to create several fake stores around the dojo.

Another undeniable advantage is that the production is allowed to leave the signs in place between seasons. The fact that the facade of the Cobra Kai dojo remains visible quickly encourages fans to make their pilgrimage. And it’s a pity if it’s impossible to see inside. After all, all the scenes taking place on the tatami were shot in the studio.

The Crossroads Shopping Center regularly hosts actors, such as franchise stars William Zabka and Ralph Macchio, the respective interpreters of Johnny Lawrence and Daniel LaRusso. They even meet their fans between takes.

Nine actors from the Karate Kid trilogy have reprised their roles in the Cobra Kai series. 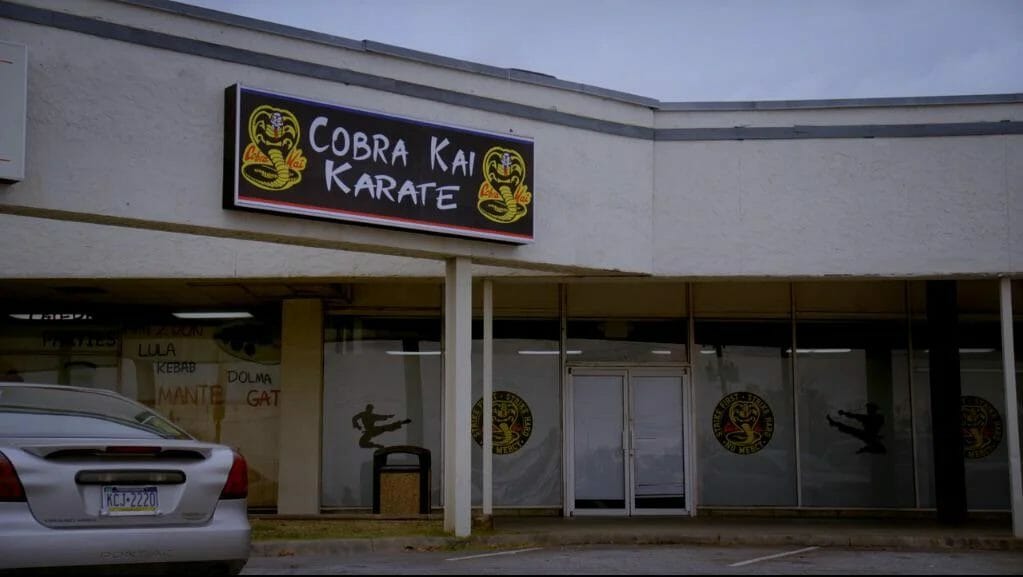 Located in the middle of a small shopping center, the Cobra Kai dojo does not go unnoticed in the landscape.

Not far from the interstate, at the border of Sylvan Hills and Polar Rock, the Crossroads Shopping Center offers a large number of shops. Some of them are fictitious, however, such as Reseda Flats Mini Marts, Arroghj Kebab and of course Cobra Kai Dojo, whose signs, installed as part of the production of the Karate Kid spin-off series, are kept in place between shoots. With its typical layout, consisting of a series of stores in a row, this mall has been one of the busiest in the area since the first season of Cobra Kai aired.

Discover all the places Cobra Kai on our map