TV show The Crown (2016)
Focusing on the unique journey of Queen Elizabeth II, The Crown series takes place around the iconic locations of royalty. An ambitious family saga that is repeatedly set in Buckingham Palace. A place however remained closed to the shootings.

Dollars have no power over the British Royal Family. So when Peter Morgan, a screenwriter already popular for having told a defining chapter in the life of Queen Elizabeth II in the film The Queenby Stephen Frears, begins production of The CrownIt was obvious from the start that he would not be allowed to shoot beyond the gate of the royal residence. Lancaster House is a more than valid alternative. Neoclassical in style, like Buckingham Palace, the palace built for Duke Frederick of York is also located not far from there, in Saint James’s.

The Lancaster House is used in the first season and then regularly. For example, it is on the balcony of this one that the royal family, accompanied by Lady Di, the wife of Prince Charles, is introduced to the public in season 4. Of course, to make the illusion perfect, the production uses digital effects. These allow parts of Lancaster House to be cut out and put into the context of Buckingham Palace. The same is true of the interiors. They are also very similar to those of the official residence of the Queen and Prince Philip, they host several times the shooting. This is not the first time that the place has received cameras. In 2010, scenes from The King’s Speech were already filmed there.

Queen Elizabeth II has been played by three actresses over the six seasons of The Crown: Claire Foy, Olivia Colman and Imelda Staunton. 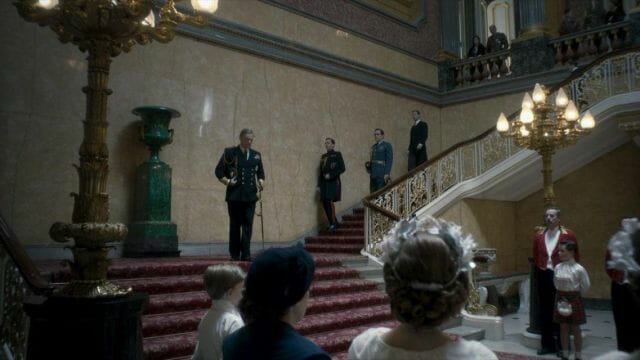 A sumptuous neoclassical building now managed by the Commonwealth Foreign Office, Lancaster House has stood in the middle of the Saint James’s district since 1840.

Construction of Lancaster House began in 1825. Originally planned to house the Duke Frederick of York, the second son of King George III, it established itself as London’s ultimate grand residence to exploit the neoclassical Georgian style . With three floors, it is decorated in the Louis XIV style with a lot of works of art. The object of Queen Victoria’s admiration, Lancaster House also hosts government receptions and is the scene of the agreements on the independence of Rhodesia in 1979. The G7 summit has been held there on several occasions.