TV show Game of Thrones (2011)
While contemplating the statue of the Titan of Braavos, Arya Stark (Maisie Williams) is stabbed by a strange old woman. This scene, shot in Girona, Spain, highlights the Galligants Bridge.

Game of Thrones in Girona

In Girona, the production of Game of Thrones has exploited many places in the old city. Some, like the steps of the cathedral or the narrow streets of the Jewish quarter, did not need much effect to look authentic. For the Galligant Bridge, it was a different story. Indeed, here, only the bridge in question, on which Arya Stark (Maisie Williams) is posted, was used. The landscape that the character is looking at, with the statue of the titan of Braavos in the distance, has been entirely computer generated.

The titan of Braavos, the armored warrior holding his shield while wielding his sword, is a recurring figure in Game of Thrones. Visible in one version of the credits, he appears several times while Arya Stark is being trained in Braavos by the Faceless, the assassin clan that includes the Forsaken Girl (Faye Marsay) and Jaqen H’ghar (Thomas Wlaschiha). The statue, unlike other elements of the decor, was never built “in hard”.

Follow in the footsteps of your favourite heroes, but with class. What could be better than a Stark House-inspired bag to walk along the wall, or rather the streets of your destination. Entirely made of imitation dragon.

Needle, a delicate sword for Arya

Weapons are of course a big part of Game of Thrones. Arya Stark’s sword, which she hides upon her arrival in Braavos, has, like the other iconic swords, been given special care. Tommy Dunne, one of the artisans of the production, explained it to the Mentalfloss website: “In the case of Arya’s sword, Needle, we wanted to make it look like what it sounded like, and give a little bit of elegance, remembering that it was more for a girl and a child at the same time —a small item which is quite delicate and quite finite.“

With 668 lines, Arya Stark is the sixth most talked about character in Game of Thrones, behind Jaime Lannister, Daenerys Targaryen, Cersei Lannister, Jon Snow and Tyrion Lannister. 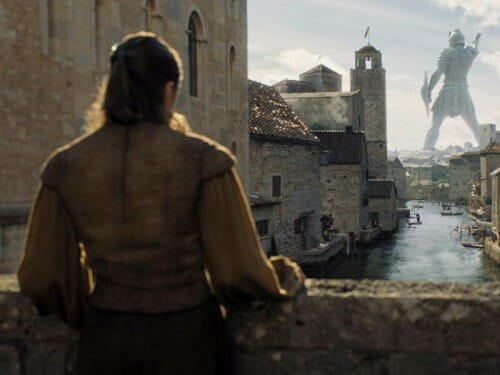 This stone work is an integral part of the old town of Girona in Spain. It spans the river of the same name.

The Galligants is only 4.5 km long and runs through Girona. The Galligants bridge is probably the most beautiful of all the works built on the watercourse. It is located not far from the Saint Pere de Galligants monastery and was used during the filming of the HBO series Game of Thrones. 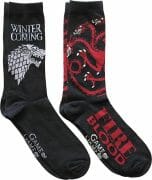 Christmas is coming ! Dress in a “Pop” way for Christmas with these socks inspired by the Game of Thrones series and its famous line “Winter is coming”.