Comics 60 gags from Boule et Bill Jean Roba (1962)
One of the most famous duos of the 9th art, Boule et Bill, is honoured in the town of Jette, near Brussels. The Boule et Bill roundabout hosts a beautiful statue of the little boy and his cocker spaniel made by Tom Frantzen. What if we went back to childhood and played leapfrog?

It was in 1959 that readers of the Spirou newspaper discovered Boule et Bill. Issue 1132 of the Dupuis comic book magazine saw the little boy in the blue overalls and his cocker spaniel appear in the mini-story Boule et les mini-requins, illustrated by Roba on a script by Maurice Rosy. The two joyful characters then make their entrance through the big door of the comic book world. With 42 albums published, animated series broadcast on television and millions of albums sold, the characters created by Jean Roba are among the most famous duos of the 9th art.

Caroline the turtle, the father, the mother, Pouf, Boule’s best friend, Caporal, the neighbour’s cat, the butcher, the teacher or Pluche the dog are the many characters in the Boule et Bill galaxy. Between childish games, silly things that end in disaster, baths or the cocker spaniel’s greed, everything has been making the youngest readers laugh for decades.

Former assistant of Franquin on Spirou et les petits formats, Spirou et les hommes-bulles and Tembo Tabou, Jean Roba creates marvellous plates thanks to a very round and flexible line, allowing him to stage his favourite nice kids. Suffering from polyarthritis in his hand, he left the animation of Boule et Bill to his assistant Laurent Verron from 2003 (8 volumes published). The series is then continued by Jean Bastide and Christophe Cazenove from the 36th volume in 2016.

Throughout his career, Jean Roba lived in Jette near Brussels. He animates the adventures of Boule et Bill and those of La Ribambelle (8 volumes published). It is in this city that Tom Frantzen erected a statue of the duo of friends a few meters from the Boule and Bill roundabout in 2000. The sculptor unveils a bronze work where the cocker spaniel plays leapfrog on the boy’s back. The artist likes to sculpt parts of the Belgian culture. He is thus illustrated on a statue of Hergé, visible in Louvain-la-Neuve or another of Jacques Brel in Brussels.

In the Belgian capital, half an hour’s drive from Jette, at number 19 Rue du chevreuil, another Boule et Bill work marks the Belgian city: a 25 m2 mural, created by Georges Oreopoulos and David Vandegeerde in 1991. Brussels and Belgium are still celebrating the tandem today. An outstanding duo in the world of comics.

Worldwide, 25,000,000 albums of Boule et Bill have been sold, translated into more than 15 languages. 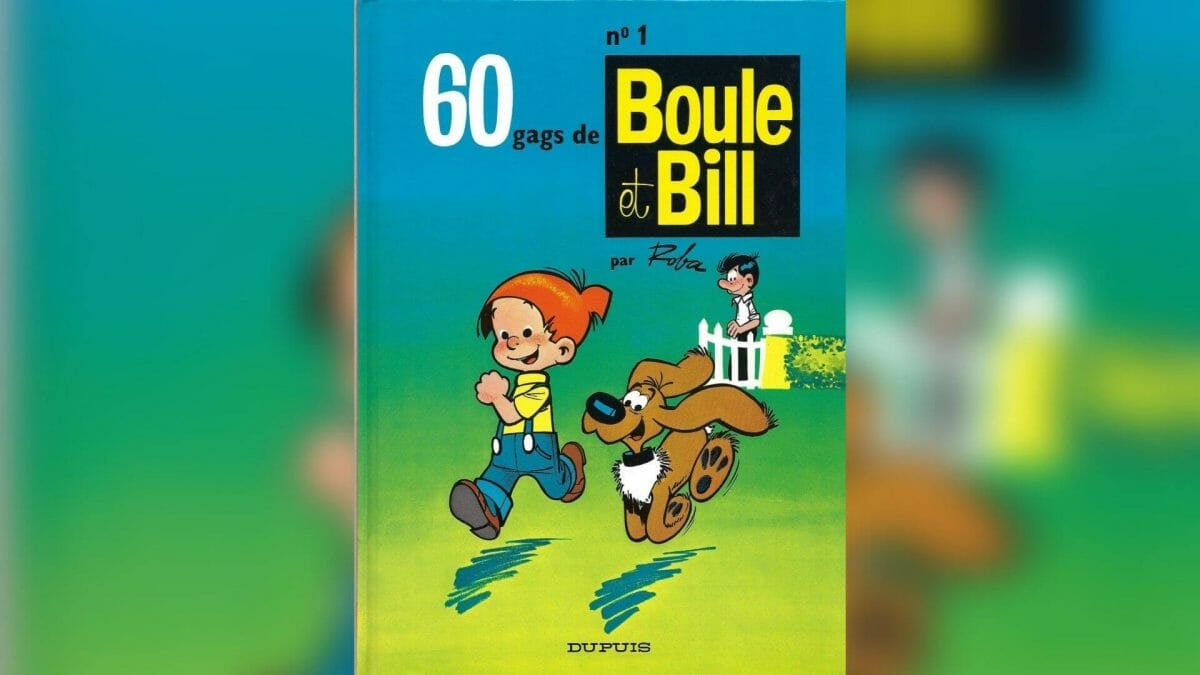 At number 13 of the Van Engeland Avenue in Jette is the Boule and Bill traffic circle and a few meters away is a statue of Boule and Bill by Tom Frantzen.

It is in this small town that Jean Roba, the cartoonist and creator of Boule et Bill, lived.

Someone once told me: “The dog is man’s best friend” ….
And this comic strip confirms it…
A family like the others with in addition to the parents a nice little boy (Boule) and a surprising dog (Bill).
Yes! This dog can do everything! He is always at the right place and at the right time, and it’s a good thing he’s there because we wonder what we would do without him. Bill is a dream dog, he is funny, very intelligent, understands everyone and he never fails to surprise!