Saga Avengers
Movie The Avengers Joss Whedon (2012)
The Avengers split up at the end of the film from the balcony of Bethesda Terrace.

Victory, the Avengers defeated the Chitauris commanded by Loki (Tom Hiddleston). The brother of the god Thor (Chris Hemsworth) is apprehended and is about to leave for Asgard, under good escort. 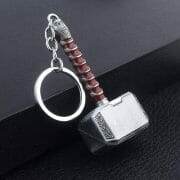 Dress up your keys with this keychain featuring Mjöllnir, the famous hammer of Thor. It also doubles as a bottle opener, perfect for your future Marvel parties.

The Avengers meet one last time to bid farewell to their friend Thor and their enemy Loki on the balcony overlooking the famous Bethesda Fountain.

Using the cosmic cube, Thor and Loki teleport to their city, letting the other members of the group go their separate ways.

Date Marvel filed the name The Avengers. Problem for the release in the UK, the series The Avengers (Bowler hat and leather boots) was prior to this copyright deposit! That’s why in the UK the film is called Avengers Assemble.

Scene at the Bethesda Terrace in The Avengers. (Photo credit: Marvel Studios)

Scene at the Bethesda Terrace in The Avengers. (Photo credit: Marvel Studios)

New York has many fountains, but none is as attractive as the Bethesda Fountain in Central Park.

Bethesda Terrace is one of the few monuments built during the Civil War. It was completed in 1873.

The fountain at the center of the fountain was designed by Emma Stebbins, the first woman to be entrusted with an art project for the city of New York.

A remarkable work depicting four cherubs embodying the virtues of temperance, purity, prosperity and peace and an angel dominating them.

This sculpture is a tribute to chapter 5 of the Gospel according to St. John in which an angel blessed the Bethesda basin in Jerusalem. A basin that is linked to the miraculous healing of a paralytic by Jesus Christ.

Once a rallying point for East Coast hippies and a hub for prostitution and drug trafficking, Bethesda Terrace had many lives. It was during this period, when the place was carefully avoided by locals and tourists, that the basin dried up.

Nevertheless, the early 1980s saw the fountain regain its luster. Entirely renovated, it initiated a major phase of rehabilitation of Central Park, gradually regaining the favor of visitors.

Regularly mentioned in popular culture, the Bethesda Terrace and its majestic fountain, because of their central position, embody the heart of the park. A heart whose heartbeat is in tune with the comings and goings of New Yorkers and tourists. 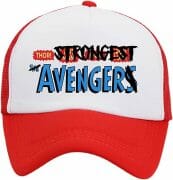 If you are also a member of Team Thor, here is the cap, worn by the god of thunder, proving that he is the strongest Avenger (especially against the Hulk).

Discover all the places Avengers on our map