The sequence at the end of which the Bethesda Fountain intervenes is a true piece of bravery. It was also a challenge for Steven Spielberg and his team. The latter had to distort the streets of New York by playing with famous monuments, before bringing in King Kong. First perched on the Empire State Building, the gorilla chases the hero played by Tye Sheridan, driving the mythical DeLorean from Back to the Future. The sequence finds its denouement around the Bethesda Fountain, in the middle of the autumnal coloured trees of Central Park…

Ready Player One is shot between the United States and Birmingham, England for a budget of $175 million. The film is full of sharp and jubilant pop culture references, even using archive footage from Shining to bring his heroes to the Overlook, the haunted hotel imagined by Stephen King, the film requires such a long post-production that Spielberg takes the opportunity to shoot Pentagon Papers before its theatrical release.

Even if it’s actually impossible to do a car skid around the Bethesda Fountain, like Tye Sheridan in Ready Player One, it’s easy to get into the atmosphere of this frenetic chase, under the gaze of the angel and his cherubs. Witnesses to countless stories, some of which have certainly contributed to the attractiveness of the place.

Ready Player One features 101 references to cult pop culture works. This is how the hero drives the DeLorean from Back to the Future and how Chucky, King Kong or the robot from the movie The Iron Giant intervene in the story. 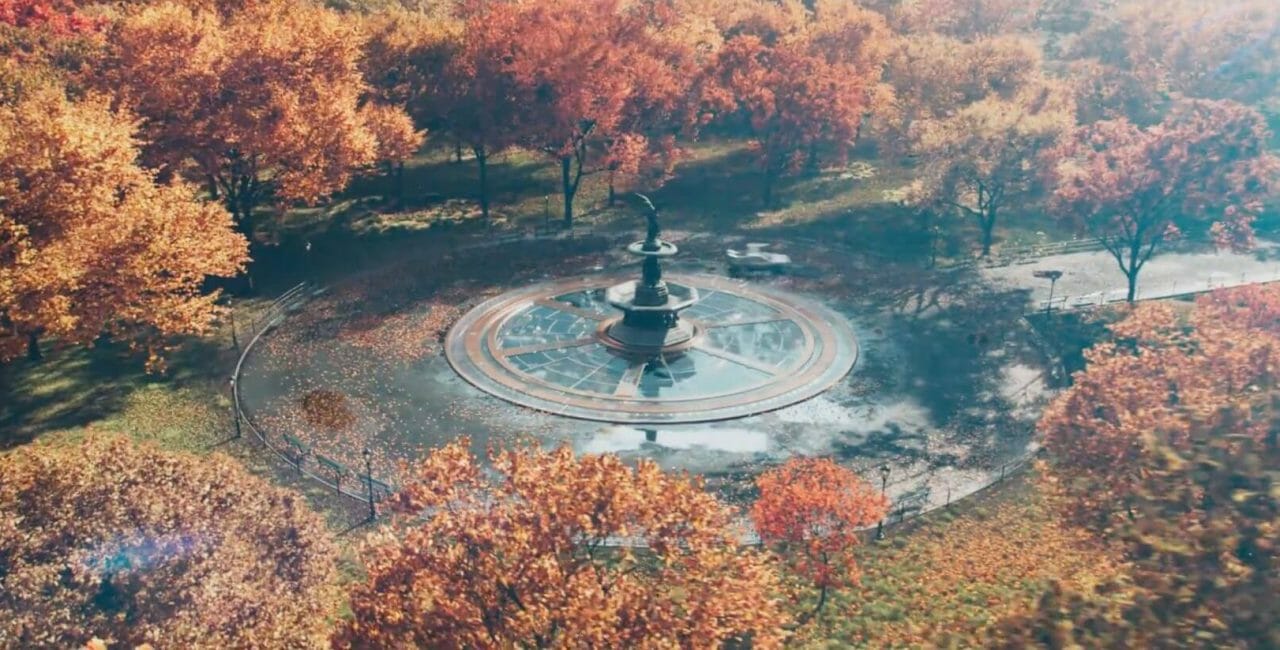 New York has many fountains, but none is as attractive as the Bethesda Fountain in Central Park.

Bethesda Terrace is one of the few monuments built during the Civil War. It was completed in 1873.

The fountain at the center of the fountain was designed by Emma Stebbins, the first woman to be entrusted with an art project for the city of New York.

A remarkable work depicting four cherubs embodying the virtues of temperance, purity, prosperity and peace and an angel dominating them.

This sculpture is a tribute to chapter 5 of the Gospel according to St. John in which an angel blessed the Bethesda basin in Jerusalem. A basin that is linked to the miraculous healing of a paralytic by Jesus Christ.

Once a rallying point for East Coast hippies and a hub for prostitution and drug trafficking, Bethesda Terrace had many lives. It was during this period, when the place was carefully avoided by locals and tourists, that the basin dried up.

Nevertheless, the early 1980s saw the fountain regain its luster. Entirely renovated, it initiated a major phase of rehabilitation of Central Park, gradually regaining the favor of visitors.

Regularly mentioned in popular culture, the Bethesda Terrace and its majestic fountain, because of their central position, embody the heart of the park. A heart whose heartbeat is in tune with the comings and goings of New Yorkers and tourists.

Discover all the places Ready Player One on our map