Saga Fantastic Four
Comics Fantastic Four Stan Lee (1961)
The building at the corner of 42nd Street and Madison Avenue may be inconspicuous among Manhattan's glass and metal buildings, but it plays a big role in pop culture. For it is indeed here that the Fantastic Four have taken up residence in the Marvel comics...

The Fantastic Four is the first superhero team to use secret identities and not be open about it. The team consists of Reed Richards, a scientific genius who can stretch his body at will, Jane Storm, his wife, whose power consists of becoming invisible and creating force fields, Johnny Storm, Jane’s brother, aka the Human Torch, and Benjamin Grimm, who is known as the Thing because of his appearance; the latter resembling a stone giant. Characters whose powers come from massive exposure to cosmic rays while on a mission in space.

Created by Stan Lee and Jack Kirby at the request of Atlas Comics, the future Marvel Comics, in response to the Justice League of DC Comics, the Fantastic Four have a home in the Baxter Building. In the comics, the top five floors are bought by Reed Richards to establish the headquarters of his team. A section of the building is totally modified to meet the needs of the Fantastic Four but also to face the attacks of their enemies, the terrifying Doctor Doom in the lead.

In the comics, these assaults make the owner of the place, a man named Walter Collins, regret renting out his walls to superheroes. His regrets are legitimate as the threat to the Baxter Building is so great. The building was eventually destroyed after being beamed into space by Doom’s adopted son. An event that led to the construction of the Four Freedoms Plaza, on the same site, before the latter was also destroyed to eventually make way for a new Baxter Building…

In our reality, the building at 330 Madison Avenue does not house any superheroes. Just a lot of offices. A rather discreet monument of pop culture and of the great history of comics. While the address of the Baxter Building is supposed to be the same in the Fantastic Four movies as well as the Fantastic Four and the Silver Surfer, the building doesn’t look the same at all. And for good reason, it is in fact the Marine Building, a superb work of Art Deco architecture from the 1930s, located not in New York but in Vancouver. Another popular site in pop culture, which can be seen in the series Smallville. That’s where the Daily Planet is located. He also shone in Blade: Trinity and Timecop. However, the original Baxter Building is indeed in Manhattan, where some of the most memorable battles for the survival of our species took place between the pages of comic books… 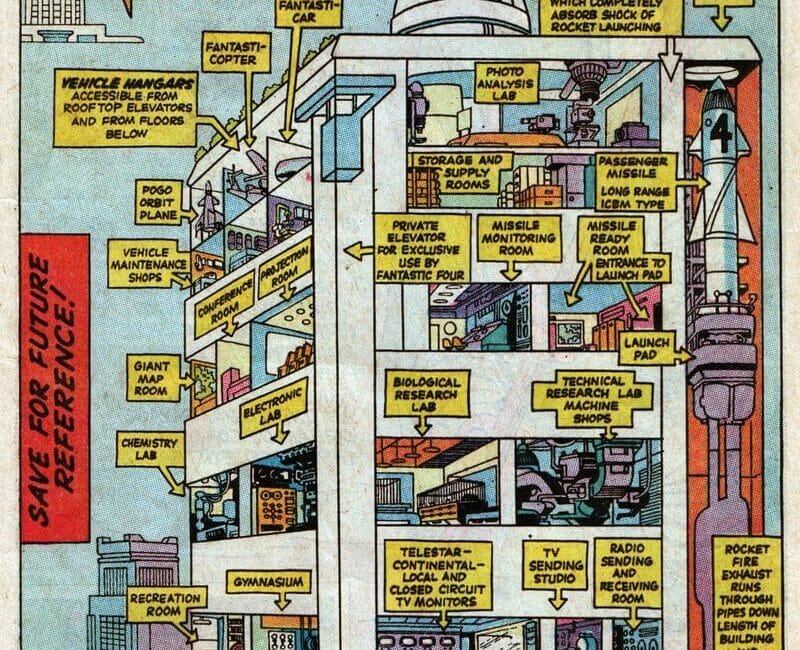 Built in 1964, this building at 300 Madison Ave reaches 170 meters and has 41 floors. A giant of glass and metal, well known to comic book fans…

This building of 300 Madison Ave is next to many legends like the United Nations Headquarters, the Chrysler Building, Grand Central Terminal, Bryant Park, the New York Public Library and the Bank of America Tower. 42nd Street also transits Times Square before crossing Hell’s Kitchen.

It was nicknamed The Deuce in the 1960s and 1970s because of the presence of numerous adult cinemas and prostitution parlors. It has since been rehabilitated and is still very popular with tourists.

Discover all the places Fantastic Four on our map