TV show Maid (2021)
Alex Russell (Margaret Qualley) works as a waitress at the Bear Hunt, a country-style bar. It is here that she first notices Sean (Nick Robinson) while he is reading a book by Charles Bukowski. A sequence shot in a real bar, actually located in downtown Victoria, Canada.

In order to give as much realism as possible to her mini-series, showrunner Molly Smith Metzler chose to shoot as much as possible in real locations. It is then that she gives birth to the town of Port Hampstead, a fictionalized version of Port Townsend, Washington, where Stephanie Land, the author of the book on which the screenplay is based, lived. When it comes time to shoot the pivotal sequence in which Alex Russell (Margaret Qualley) meets the future father of her child, Sean (Nick Robinson), the show’s director sets up shop at the Duke Saloon, a well-known Victoria nightclub famous for its Western atmosphere.

Very few modifications are necessary as the set is perfectly authentic. It is also here that Alex takes a break to read his writings to an indifferent audience.

Afterwards, the film crew kept moving around Greater Victoria, sometimes in town, sometimes in other bars like the Singing Swan, where Sean works, or in the countryside where the couple lives in a mobile home on the edge of the woods. Taking advantage of a climate similar to that of the state of Washington, the directors brought in succession behind the camera, give body to the story over the course of these places today unchanged, such as the Bear Hunt Bar, where it is pleasant to have a drink while listening to the local music bands.

Margaret Qualley and Nick Robinson were the first actors hired by the production. 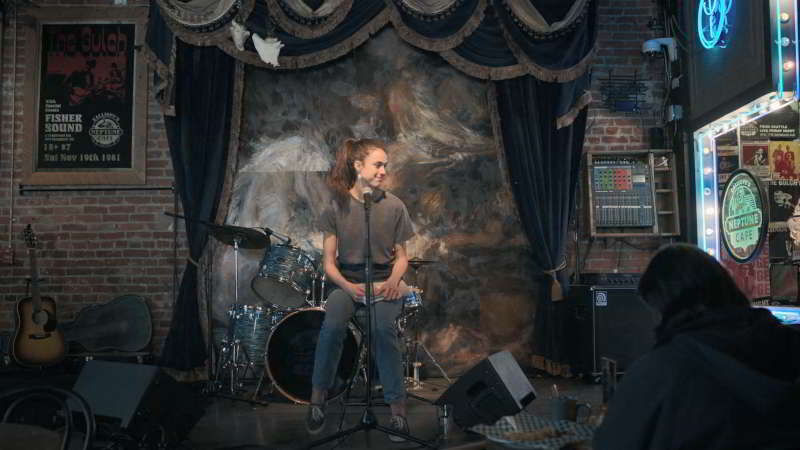 By replicating the atmosphere of American saloons, this bar is as immersive as it is inviting. One of the most popular in Victoria!

Opened in 2014, the Duke Saloon offers the first country-only music venue in all of Victoria. It was because they couldn’t always find a venue to host their parties, that a country dance association made the decision to create their own bar. It was established in an old brick building from 1902, formerly used by the BC Electric Company to house its streetcar trains. There are many concerts and it is possible to taste delicious cocktails inspired by the Far West and its legends.

Discover all the places Maid on our map