Movie Bagdad Cafe Percy Adlon (1987)
Forever associated with the hit Calling You, Bagdad Cafe is a singular film in its freedom of tone. A feature film whose setting is now constantly praised by successive generations of fans from around the world. A landmark site on Route 66 on which time seems to have no hold.

Known for his TV movies as well as his feature film Celeste, released in 1981, German director Percy Adlon decided to produce his new film in the United States. We are in 1987 when he lands with his team not far from the ghost town of Bagdad, on Route 66. It is in fact to this locality, still inhabited at the time, that the director refers in the title of his film. The story, unclassifiable, features Marianne Sägebrecht, also a German actress, CCH Pounder and Jack Palance. These two play respectively the Bagdad Cafe owner and a painter, a former Hollywood set decorator. Percy Adlon and his team choose to set the story at the Sidewinder Café, without depriving themselves of taking their cameras around the area, in the heart of the Mojave Desert, in Barstow or even Daggett. The shooting lasts exactly one month.

When the film was released in theaters, the Americans gave it a lukewarm reception, to say the least. Europe, on the other hand, is succumbing. In France in particular, Bagdad Cafe won the César for best foreign film. Very quickly, the Sidewinder Café became a must for tourists passing through on Route 66. In 1995, the managers decided to fully accept the new status of their establishment and renamed it Bagdad Cafe. The trailer in which Jack Palance’s character lives is still visible. The water tower visible on the poster, on the other hand, has collapsed under the weight of the years. The film spawned a two-season TV series starring Whoopi Goldberg and a musical.

Written and directed by Eleanor and Percy Adlon, Bagdad Cafe tells the story of a German tourist who stumbles into a run-down motel in the Las Vegas area. Located on Route 66, the establishment became the scene of surrealist adventures. If Percy Adlon was successful, it was especially in France that his film found its audience, drawing more than 2,300,000 spectators. The film is also known for Calling You, the song performed by Jevetta Steele on the soundtrack.

The budget for Bagdad Cafeis two million of dollars. The film doubled in the United States and brought in more than 50 million worldwide. 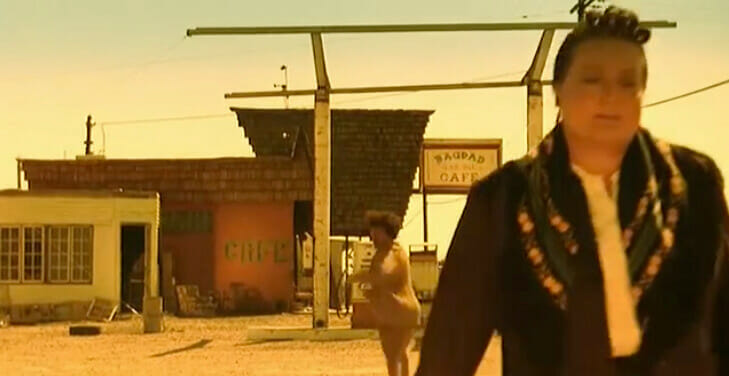 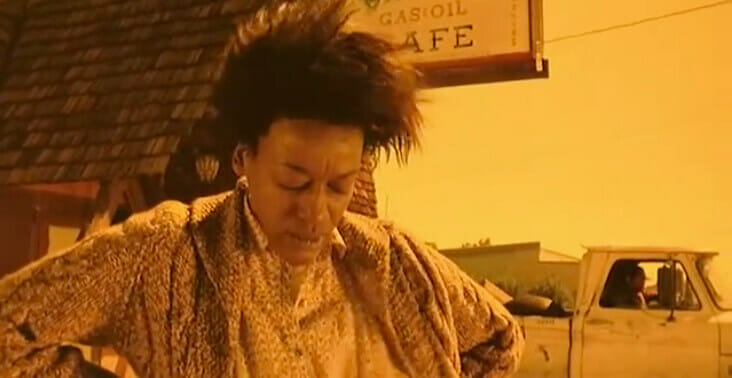 A Route 66 attraction, tourists flock to this café to experience the timeless atmosphere.

When Percy Adlon’s production team moved in, the Bagdad Café was still called the Sidewinder Café.
It was located in Newberry Springs, on Route 66, about 80 kilometers from Baghdad, an old town where a Bagdad Café had already been. Following the success of the movie, the managers decided to change the name of their establishment. Visited by tourists from all over the world, it is decorated with many banknotes from all countries, flags and souvenirs left by customers. You can taste a typical cuisine and the welcome is always warm.

Discover all the places Bagdad Cafe on our map