The extravagant Ziggy Stardust made his first appearance on stage on February 10, 1972. A character David Bowie describes as an alien who came to Earth to become a rock and roll icon. Bowie is already an icon, even if the best is yet to come. With a handful of memorable songs to his name, the musician was about to impose a string of hits and, at the same time, thicken his exciting, multi-faceted universe. Inspired by Vince Taylor, the Legendary Stardust Cowboy, one of the founding fathers of the psychobilly genre and Japanese modeler Kansai Yamamoto, Ziggy Stardust
impresses the audience. The album was released a few months later, on June 16, 1972. On the cover, David Bowie poses alone in a dark alley, precisely at 23 Heddon Street, under a sign that says K. West. Dressed in his Ziggy costume, he looks like he came straight out of a flying saucer. An alien who came to revolutionize rock and music as a whole.

The weather is overcast on the London side. David Bowie has the flu but is still in a Heddon Street studio with his musicians to have his picture taken for the album. From this session, the perfect photo should emerge to illustrate the cover. At one point, he informs his companions that he wishes to leave. Once on the street, a few drops start to fall. David Bowie poses for photographer Brian Ward. The photo is then reworked by artist Terry Pastor. His action consisted in colorizing the photograph: “I was given a black and white photograph printed on matte paper – David Bowie’s management wanted some colour put into it. I also did the cover for his previous LP, Hunky Dory. This was also a black and white photo that I coloured up in the same way. Perhaps this is why the label decided that the Ziggy cover would be similar? I applied the colour using photo-dyes with an airbrush – a DeVilbiss Super 93.”. The rest is legend. With such an iconic image, David Bowie became a star. From a rising star, he became one of the most important artists of his time. A status he only confirmed from record to record until his passing on January 10, 2016. 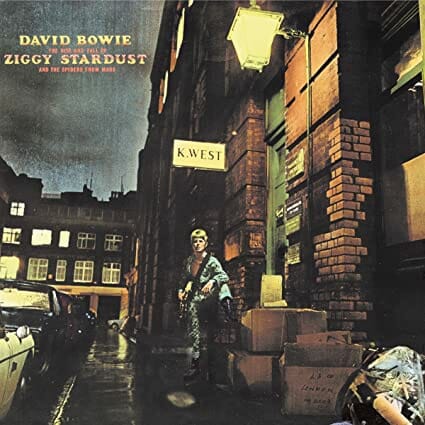 If David Bowie has marked several places in London during his prolific career, it is at 23 Heddon St that fans come to pay tribute. Where the city has affixed one of its famous “Blue plaques”.

In 1972, 23 Heddon St was home to a furrier’s house. Right next door, is located the studio Ward’s Heddon Street where Davi... Learn more about 23 Heddon St