The Woolworth’s has always enjoyed a certain prestige, being the object of a special attachment. It stands out in the New York skyline, with its gargoyles, finials and other pinnacles. And while it would not be out of place on the old continent, in London or Paris, here in Manhattan, it stands out.

Often cited among the most beautiful buildings in Manhattan, the Woolworth Building was built in 1913.

With its 57 floors and a height of 241 meters, it is the tallest skyscraper in the world. This title was retained until 1930 and the inauguration of 40 Wall Street and the Chrysler Building.

The neo-Gothic style Woolworth was initially intended to house the offices of the Five-and-Ten-Cent-Stores chain, of which Frank Woolworth was the director. The millionaire paid the $13.5 million construction bill in cash!

A treasure unfortunately closed to the public. Its three-story hall, covered with elaborate ornaments, is only open to hand-picked visitors on special occasions.

It is as if the Woolworth Building had something to hide… 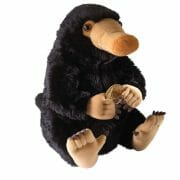 If you’re also attracted to everything that shines, the Niffler plush of Fantastic Beasts is the perfect companion 😀